Pat Steir: Artist, directed by Mexico City-born novelist and filmmaker Veronica Gonzalez Peña about the life of artist Pat Steir, was released on digital platforms. It is distributed by Giant Pictures, a digital distributor for independent filmmakers. 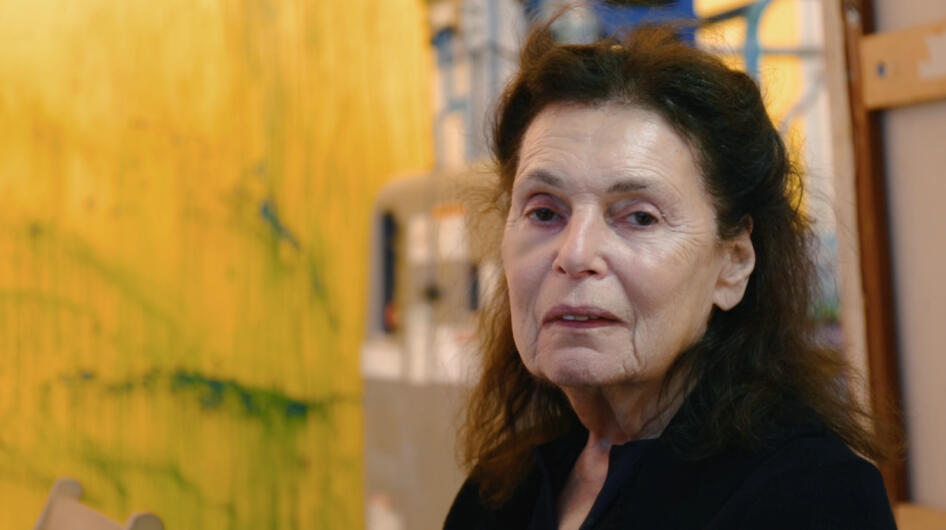 The impetus for this project stemmed from a series of conversations between Steir and Gonzalez Peña about family, psychoanalysis, poetry and books, Steir’s art practice, feminism, and politics. Because of Gonzalez Peña’s background as a novelist, she has structured the film like a first-person novel; it is character-driven, broken down into chapters, with a circular narrative and a slow reveal of self.

Shot over the course of three years, primarily in Stier’s home and studio, Pat Steir: Artist is a poetic visual exploration of creativity and process, on what it is to live an artistically engaged life. Gonzalez Peña not only showcases Steir’s painting practice but gives Steir a chance to speak about her childhood, her experiences in New York in the 70s and 80s, and her relationships with artistic mentors notably Agnes Martin, Sol LeWitt, and John Cage. Pat Steir: Artist is a refreshingly candid and revelatory portrait of a trailblazing feminist, who was a leader in the development of Conceptual Abstraction and who has been on the forefront of American painting for half a century.

“Pat Steir and I met eight years ago, and immediately recognized something in each other,” said Gonzalez Peña. “We not only had many friends in common but also a similar way of thinking about artistic practices. At a time when I was moving from writing into filmmaking, Pat provided me with a way to think about that shift. I cast her as one of the principal characters in my film Cordelia, alongside Michel Auder, Douglas Gordon, and Alice Weiner. It was at this point that Pat and I started speaking about making a film together,” she added.

Pat Steir was featured in a 1964 ‘Drawing’ exhibition at The Museum of Modern Art, and in the following decade she was part of the pioneer female artists gaining acknowledgement on New York.  Her friendship with Agnes Martin, Sol LeWitt, and with composer John Cage marked her artistic explorations and methodologies: instead of touching the canvas, she decided to pour or throw the paint from the top of vertically hung canvases, for example. Adhering to Cage´s idea of chance in his musical creations she opened up the way for allowing the materiality of painting to express itself.

With a career that has spanned over half a century, Pat Steir is a leading force in the development of Postmodern abstraction. Best known for her dripped, splashed and poured “waterfall” paintings, all of her work exists in conversation with various art historical movements—from Abstract Expressionism to traditional Chinese painting. Working with these influences, the artist creates meditative, often large-scale pieces that frequently reference the natural world.

Veronica Gonzalez Peña is a novelist and filmmaker born in Mexico City and raised in Los Angeles. She founded Rocky Point Productions in 2013 to produce artist-driven films. Pat Steir: Artist is her first documentary. In addition to Pat Steir, Gonzalez Peña has worked with Michel Auder, Chris Kraus, Sylvère Lotringer, Douglas Gordon, Tala Madani, Ben Ehrenreich, Michael Silverblatt, Servane Mary and Penelope Pardo. She is currently working on a film about Lawrence Weiner titled Lawrence Weiner: Writing on the Wall. Since 2013, Veronica has moved into increasingly performative work, writing scripts for films she directs and produces, as well as a play, which starred Charlotte Rampling in her first theatrical performance. Neck of the Woods, directed by Douglas Gordon, premiered in the UK in 2015 as part of the Manchester Festival.