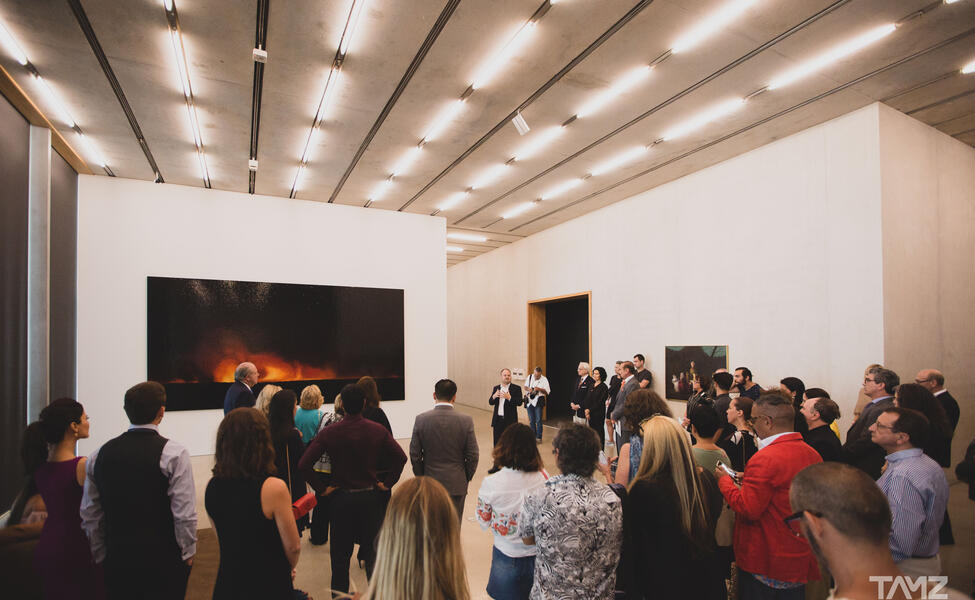 Pérez Art Museum Miami (PAMM) announces On the Horizon: Contemporary Cuban Art from the Jorge M. Pérez Collection, an exhibition of over 170 works of art, spanning painting, drawing, photography, mixed-media and sculpture. The exhibition is presented in three parts over the course of a year, and features a rich panorama of recent work produced by artists living both in Cuba and abroad. On the Horizon celebrates the recent generous gift of Cuban artworks donated to the museum by Jorge M. Pérez in December 2016, and includes a significant number of recent acquisitions purchased during the last year with funds provided as part of the donation.

As Miami’s flagship contemporary art museum, collecting the work of Cuban artists and documenting the Cuban Diaspora exemplifies PAMM’s mission to represent its place in the world—geographically, conceptually and intellectually.Cuba, equally a part of Latin America and the Caribbean, has been an area of sustained interest at PAMM going back to its beginnings as a presenting institution.

"This vast collection is an incredible resource, something that this multipart exhibition looks to demonstrate,” says PAMM Director Franklin Sirmans. “It helps us position the museum as a crucial center for the collection and discussion of Cuban Art, one that very much reflects Miami's own cultural history and contemporary relationship to Cuba."

Jorge Pérez: "My initial interest in building this collection has been personal, being born of Cuban parents and having spent several early years of my life on the island, I've been drawn to Cuban art for how it relates to my own cultural background. My additional interests are purely art-related, as I find the work being produced by Cuban artists on the island, here in Miami and throughout the diaspora, as some of the most exciting art being produced today."

On the Horizon is presented in three distinct, yet interconnected “chapters”, with a new chapter opening every three months. The exhibition is organized around the metaphor of the horizon line—a motif that appears in many of the works on view—and brings together a strong view of artistic practices in Cuba from the last three decades as well as work by young, lesser-known artists working on the island and across the globe. The individual chapters each explore various meanings of the horizon, which include the vista as a symbol of desire, longing or containment. This symbolic framework helps generate a larger dialogue between the works on view and the specificities of Cuba’s current physical, social and political landscape, as revealed through each artist’s personal experience and unique aesthetics.

Describing the chosen thematic approach to the presentation, Chief Curator Tobias Ostrander explains: "Structuring this exhibition around the poetic and open symbol of the horizon line allows us to focus on the diverse and often subtle visual languages of the artists included in this extensive collection; as they each look to address their personal, aesthetic and socio-political concerns."

On the Horizon features works by many of the world’s leading contemporary Cuban artists, including Alexandre Arrechea, Carlos Garaicoa, Hernan Bas, Yoan Capote, Teresita Fernández, Enrique Martínez Celeya, Glexis Novoa, and Zilia Sánchez, among others. Each presentation involves a partial rehanging of the exhibition galleries, accompanied by distinct public programs and performances, as well as the placement of select works from the Pérez collection within the museum’s permanent collection galleries. A number of works are included in each presentation, serving as a contextual link between each chapter. These include: Yoan Capote’s outstanding large-scale painting Island (sea-escape) (2010); Enrique Martinez Celaya’s Summer / Verano (2007); Fire (America) 5 (2017) by Teresita Fernández; and Horizonte (2015) by Elizabet Cerviño.

Chapter 1: Internal Landscapes opens June 8, 2017 and focuses on the horizon as it relates to the body, as the horizon evokes both a vast, physical space and an internal, psychological one. Artists represented in this Chapter include Antonia Wright, José Bedia, Juan Carlos Alom, Luis Cruz Azaceta, Hernan Bas, Tania Bruguera, Rubén Torres Llorca, andSandra Ramos, among others.These artists create expansive visual spaces that engage the body of the viewer as well as works that represent the human figure as a symbol of mystery, longing and the unknown.

Chapter 2: Abstracting History opens fall 2017 and takes a closer look at abstract geometries—including linear horizon lines—as they relate to both personal and historical narratives. The works selected explore spiritual as well as political histories, and examine both past and contemporary realities within Cuba and its diaspora. Works by Havana-based artist Reynier Leyva Novo revisit scenes from Cuban history to offer new critical perspectives—including El Peso de la Historia (The Weight of History) (2014), an installation involving black squares of ink painted directly on the gallery wall that represent the distinct amount of ink used to write nine influential laws that changed the history of Cuba.Multipanel canvas works Zilia Sánchez, a Cuban artist living and working in Puerto Rico, showcase the artist’s approach to formal abstraction through her signature use of a shaped canvas, expressing a sensual juxtaposition between femininity and masculinity. Other artists included in Chapter 2 include Alexandre Arrechea, Waldo Balart, Manuel Piña, and Eduardo Ponjuán.

Opening in early 2018, On the Horizon concludes with Chapter 3: Domestic Anxieties, a presentation of works focusing on the everyday insecurities and personal stresses of the individual. Artists included explore both domestic and public architecture as designated emotional spaces, as well as how language and texts are used to create spaces of aspiration, haven and doubt. In Glexis Novoa’s Revolico (2014), the Miami-based artist mixes words like “Guggenheim” “Phillips”, and “Revolico”, as a means of co-opting familiar language to comment on the contradictory sociocultural and economic experiences for those living between Cuba and America. Angel Delgado’s Dream reflections (2014) depicts a man trying to push open a larger than life lock. For Delgado, an artist living and working in Las Vegas, Nevada, the theme of struggle against control and societally imposed limitations results in a poetic commentary on individual freedoms. Works by Havana-based collective Los Carpinteros are also included in Chapter 3. A large watercolor triptych entitled Parte de parte (2008) elegantly explores themes of conceptualism, formalism, and architecture.

Many of the works on view throughout On the Horizon have never been seen before in a museum setting, while others have appeared in important previous exhibitions at MAM and PAMM or other significant venues such as the Havana Biennial and Venice Biennale, among others. The unique serial exhibition format reflects the diversity of curatorial themes and works featured, and showcases the breadth of PAMM’s Cuban art collection, one of the largest collections of contemporary Cuban art in any American museum.