Aráoz’ solo exhibition Solid Dream was inaugurated virtually on Saturday, October 24, in the Museum of Modern Art of Buenos Aires, within the framework of the Museums Illuminate festival organized by RAME (Argentine Network of Museums and Art Spaces) 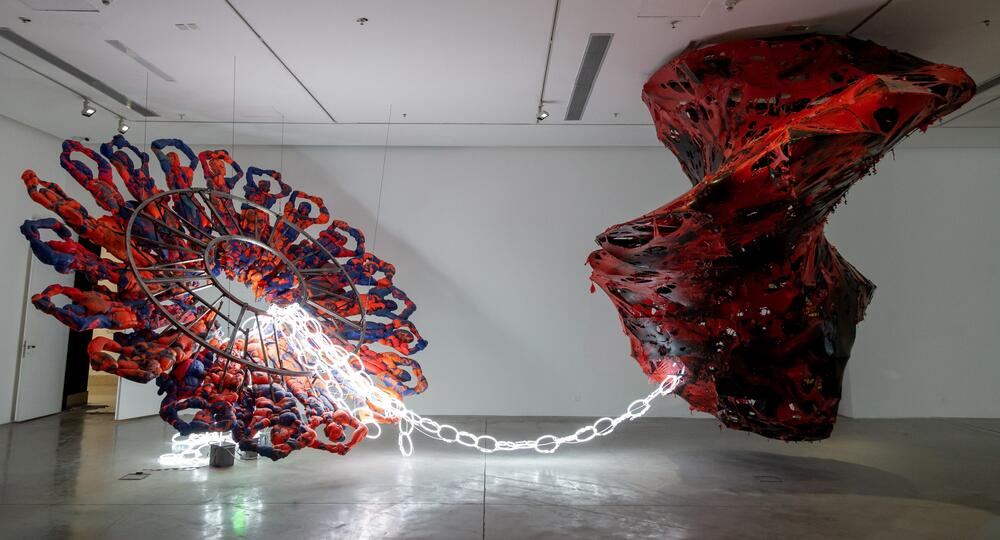 Nicanor Aráoz is a central artist in the panorama of contemporary Argentine sculpture. For Solid Dream, a site-specific project created especially for the rooms of the Museo Moderno with the curatorship of Lucrecia Palacios, Aráoz shaped a landscape in which four large pieces account for various regeneration processes. The rehabilitating capacity of a flowering, the delicacy of ceramics or the emotionality of vintage music of a jukebox coexist in space with the destructive energies of tornadoes, the violence of war and the aggressiveness of synthetic material, such as polyurethane. If in several of his previous exhibitions Aráoz had worked on repressed drives –crime, sexuality, torture–, here the artist moves away from the traumatic story and wonders about new ways of life that combine technology and nature.

In his works, Aráoz has investigated the shapes of the human body, creating images in which it dissolves and recomposes itself as it faces violence, debauchery, eroticism and different processes of metamorphosis. The transformation of matter is a central element in his work. Hence, over time, his exhibitions have become populated with humanoids, larval forms and organic references of all kinds that the artist places in scenes close to the logic of science fiction, retro-futurism or cyberpunk.

Nicanor Aráoz (Buenos Aires, 1981) is an artist who works on the basis of sculpture, and also includes installations, videos and performances. Through delicate processes of visual association, his work and exhibitions make use of references to anime, Gothic aesthetics, the universe of music and criminology, among others. He participated in the Artists Program of the Di Tella University, in 2010, in the fifth edition of the Kuitca Scholarship in 2011, in the International Residency Program of the ISCP in New York, in 2017, and in the Pivo residence, San Pablo, in 2019. Among his latest solo exhibitions we can mention Placenta scarlata, Barro Arte Contemporáneo, Buenos Aires, 2018; Because I'm never what I have, Emily Harvey Foundation, New York, 2017; Genetic Anthology, Universidad Torcuato Di Tella, Buenos Aires, 2016. He has also exhibited at the Museum of Modern Art in Buenos Aires, La Tabacalera in Madrid and the Castello Di Rivoli in Turin, among other art spaces. In 2016, Mansalva publishing house published the book Nicanor Aráoz: Genetic Anthology of his work.

Last Friday, October 23, the Argentine Network of Museums and Art Spaces (RAME) called on the country's museums to illuminate their facades to convey in this gesture the essential and fundamental contribution of art to the expansion of public space and for the rebuilding of social ties in communities. Since the emergence of the pandemic, this new network has been developing protocols for the sector and for the organization of different public conferences, with the aim of sharing experiences of reopening museums in the country and in the world.

The different cases show that these institutions are safe spaces that are easily adaptable to new habits, that allow the dissemination of prevention measures to be adopted by all citizens and that they seek to facilitate the personal and affective encounter of visitors with works of art. This symbolic initiative to illuminate the facades of museums seeks to make visible their essential value as cultural institutions, producers of knowledge and a sense of belonging, at the same time that they represent a space of relaxation and recreation for citizens.