NEW AUCTION RECORD AT SOTHEBY’S FOR WIFREDO LAM AT $9.6 MILLION FOR HIS OMI OBINI

An unprecedented series of three auctions, conducted remotely by Chairman and auctioneer Oliver Barker in London, took bids from Sotheby's specialists on phone banks in New York, Hong Kong & London, as well as online bidders. The ongoing sales were gloablly live streamed, and it was led by Francis Bacon’s “Triptych Inspired by the Oresteia of Aeschylus”, sold for $84.6 Million 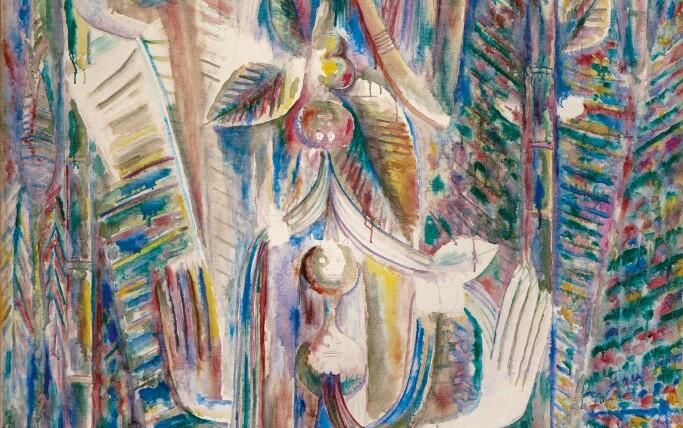 Julian Dawes, Sotheby’s Head of the Impressionist & Modern Art Evening Sale in New York, remarked: “We are thrilled with the results from tonight’s sale, which was marked by tremendous lot-by-lot successes, including Pablo Picasso’s stunning Head of a Sleeping Woman and a new auction record for Wifredo Lam at $9.6 million for his Omi Obini.”

One of the most renowned Cuban artists of the modern era, Wifredo Lam achieved an inventive synthesis of European modernism and Afro-Caribbean symbolism. He was born in 1902 in Cuba to parents of Cuban, Congolese and Chinese ancestry. His godmother was a celebrated Santeria priestess and the syncretic rites of his childhood would be a dominant influence in his later work. After several years at the Escuela de Bellas Artes, he left for Madrid, where he studied with Fernando Álvarez de Sotomayor y Zaragoza, the director of the Museo del Prado. His work during the 1930s was influenced by the Cubist, Surrealist and Fauvist movements, and was enthusiastically championed by Picasso, who made the introductions that led to his first exhibition in Paris. Lam returned to Cuba in 1941; his attention to the island nation's fraught social conditions as well as its lush tropical flora led to a new pictorial vocabulary that featured chimeric figures with elements derived from local plants, African masks and mammalian limbs. Having continued to exhibit his paintings and works on paper to worldwide acclaim, he started experimenting in metal and ceramics in the 1970s. He died in 1982 in Paris. Signifying both the collection’s illustrious quality and extraordinary examples of Surrealism, Omi Obini is magnificent in both its scale and spectacular use of color, and exemplifies the apex of Lam’s fully realized aesthetic vision.

Anna Di Stasi, Sotheby's Director of Latin American Art, commented: “Tonight’s groundbreaking result for Wifredo Lam’s masterpiece Omi Obini, also from The Vanguard Spirit, not only resoundingly set a new auction record for the artist, but it also asserts Lam’s place as one of the premier Surrealist artists of his time. The undisputed masterpiece ranks among his finest works, comparably perhaps only to his well-known painting The Jungle, in the permanent collection of MoMA in New York. In the same vein, the Chilean artist Mario Carreño’s Cortadores de caña also established a new auction record, and is one of the most iconic images of la vanguardia Cubana. Since Sotheby’s began featuring Latin American artists in the Impressionist & Modern Art Evening Sales rather than separate Latin American Art sales, we have seen them continue to achieve record prices each season, and The Vanguard Spirit emphatically asserted that trend.”

“There were strong results from The Vanguard Spirit, one of the most distinguished collections of Surrealist & Modern art that has come to market in recent memory” continues Dawes, “The group of Surrealist women artists from The Vanguard Spirit surged to achieve several new artist records for Leonor Fini, Remedios Varo, and Alice Rahon, far surpassing their high estimates. These results showcase how Surrealism continues to grow as a category to include more diverse artists from around the world and achieve new benchmarks that compete with their peers. As the market continues to embrace new artists, alongside strong results from established mainstays, there is no doubt the market remains resilient and growing”