NAC Gallery + Espacio Monclova are exhibiting together for the second time in Lima, this July 11th. On this occasion, part of the exhibition Atmosferas (Atmospheres), by Nicolás Sánchez and El acero está hecho de estrellas petrificadas  (The steel is made of petrified stars) by Rodrigo Vergara in collaboration with CO Gallery and Editorial Meier Ramirez. 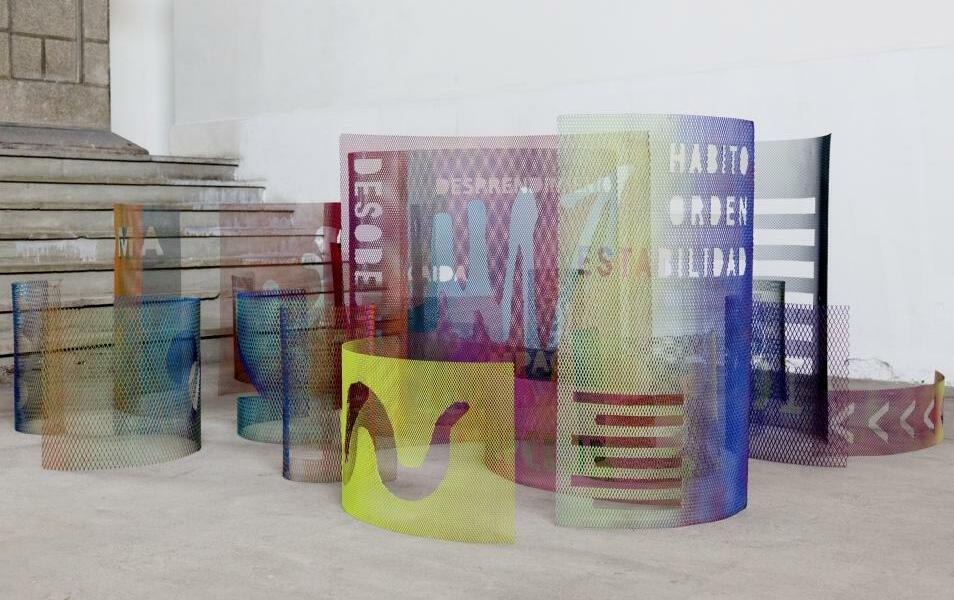 Sánchez presents a photographic record of the Earth's atmosphere, and of the color fields that light forms passing through it. Atmospheres (there is something existential in these images that I cannot name), seeks to give name in images to the overwhelming depth of those atmospheres, for the artist, loaded with eschatological questions.

Meanwhile, Vergara’s work reflects two main themes: dispossession and radicalism. His sculptural work consists of taking some words from the book El Barón Rampante by Ítalo Calvino and mixing them with symbols and characters of Microsoft Word software. He uses words that allude to rationality and behavior, but at the same time to the transgression of these terms, from what must be to situations that lead to the complete loss of the social notion, even to its alienation.

The exhibition brings together the work of two Chilean artists of outstanding careers, Sanchez in photography and Vergara with sculptures and installations, both works of deep reflection and research.

Nicolás Sánchez (1981) was born in Santiago, Chile, in his work he seeks for a look inside the mind. From the universal, but in different ways. Portraits of the invisible that reflect in all directions, he refers of this as a daily exercise. An exercise of understanding, of the insistence of the human, that tries to satisfy an inner need for the expansion of the spaces of life. He walks, lives in different places, seeks for challenge, gets lost, all as a fundamental way of being in the world. His idea of the sublime is something that can be beautiful and frightening at the same time, that awakens beautiful vertigo, a metaphysical shudder.

Rodrigo Vergara (1974) also from Santiago, Chile, manifests two concepts in his work: transference and analogy. His work invents, intervenes and interprets what he calls "communication routes ". Either, by creating, with another artist, a space as an alternative interaction medium, within the official art system (Hoffmann's house); to build a polling station within a biennial, so that the public could vote for the best and worst work of that event, a piece that inevitably derives from the public’s opinion, to write about his social ties, expectations or repressed desires, Marca con una Cruz (Mark with a Cross); or installations that play dysfunctional effects or environments of American cinema, such as Death Metal, a work that dyes green, the showroom, imitating the necrophilic scenes of the film Vertigo by Alfred Hitchcock. His work is to elaborate installations in the public space and sculptures that invite both introspection, existentialism and disobedience.