MORE EXCLUSIVE THAN EVER, THE TENTH EDITION OF THE CONTEMPORARY ART BIENNIAL OF BERLIN BEGAN

In the German capital - one of the epicenters of the international contemporary art scene - the tenth edition of the Contemporary Art Biennial of Berlin takes place since June 9. This year the Biennial, entitled We do not need another hero, has the participation of the South African Gabi Ngcobo as curator in chief.

The large number of Latin American artists participating in this edition of the Biennial is no small thing: compared to previous editions, the curatorial project for 2018 decided to reduce the cast of artists from one hundred and twenty artists who participated two years ago, to only forty six this year. Taking into account these figures, the prominence of Latin American and Caribbean art is a novelty, as some ten artists from these regions participate. 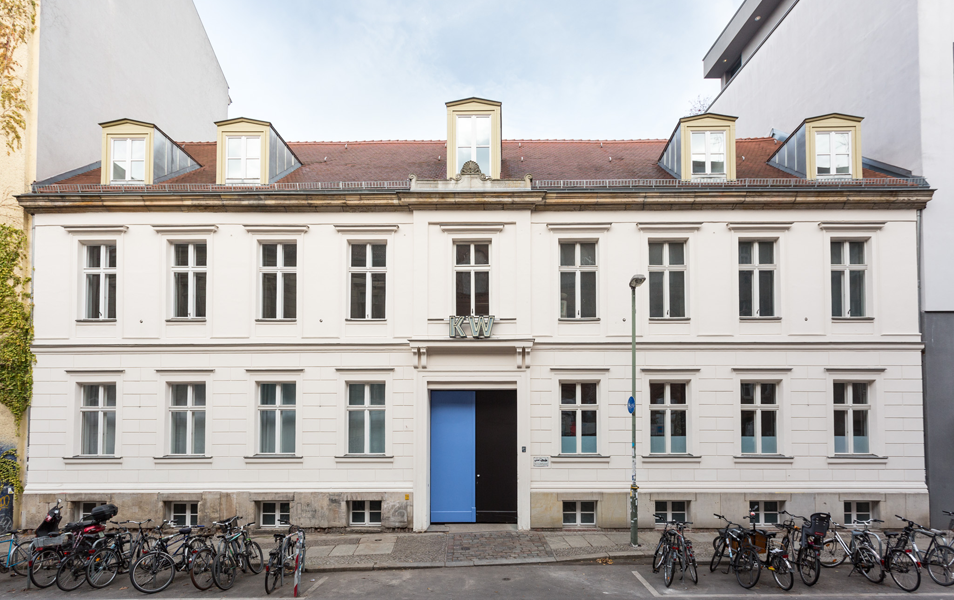 The curatorial team defines the Biennial as a "conversation with artists and collaborators who think and act beyond art when facing the incessant anxieties perpetuated by a deliberate omission of complex subjectivities". From this definition arises the criterion by which the Biennial exceeds the criterion of recognition and commitment by artists who offer inquiries in this perspective. This is how artists like Johanna Unzueta, Fabiana Faleiros, Cinthia Marcelle, Óscar Murillo, Ana Mendieta, Belkis Ayón, Lorena Gutiérrez Camejo, Firelei Báez, Tony Cruz Pabón, Las Nietas de Nonó (Lydela and Michel Nóno) and Patricia Belli appear in this tenth edition. .

The biennial takes its name from the song We Do not Need Another Hero (1985) by Tina Turner. In this way, the cycle of contemporary art that takes place in the capital of Germany is opposed to the logic of stories of the present, past or future and explores the political potential of the act of self-preservation. It also seeks to free itself from all those production systems (in terms of artistic and intellectual matter) that lead to the contamination and manipulation of subjectivities.

Samples of the works will be given in five places simultaneously: Akademie der Künste (Academy of the Arts in Hanseatenweg), Hebbel am Ufer (HAU), KW Institute for Contemporary Art, Volksbühne Pavilion and the ZK / U Center for Art and Urbanistics.

The first Contemporary Art Biennial in Berlin took place twenty years ago, in 1998, when the capital was still a city - if interesting - poor. We could say that from then on, Berlin began to mutate into the center of the emerging contemporary art scene. In this way, the city has become one of the centers of production and attraction most coveted by generations of artists since the 80s onwards.

In addition to the important Latin presence that has this small edition, it is worth noting the participation of several African or African-American artists. Mimi Cherono Ng'ok (Kenya), Thierry Oussou (Benin) and Moshekwa Langa are just some of the African artists involved.

The response to this new and exclusive curatorial project that is not afraid to leave artists out is the product of the identity search that the fair seeks to adopt. Berlin has been taken over by a heterogeneous and cosmopolitan mass of young artists with promising careers. The project of Ngcobo and his team (Nomaduma Rosa Masilela, Serubiri Moses, Thiago de Paula Souza and Yvette Mutumba), would seem to be a reflection of this new European babel that is open to the world.

Johanna Unzueta (Santiago, Chile, 1974) brings to Berlin a series of drawings and works of recent production. On the one hand, at the ZK / U - Centro de Arte y Urbanística Unzueta made a large-scale mural. On the other hand, in a smaller format - which dialogues with presentation formats designed by Italian-Brazilian architect Lina Bo Bardi - the Chilean artist presents drawings mounted between two pieces of Plexiglas placed on bases of recycled wooden beams.

In 1997, Belkis Ayón Manso (Havana, Cuba, 1967-199) worked on the composition of circular prints exposed in this tenth edition of the Biennial. In relation to this series, the late artist commented that: "The image of Sikán is evident in all these works because she, like me, lived and lives through me with restlessness, searching insistently for a way out ". Sikan was a female figure in the Abakuá mythology -a secret Afro-Cuban society- with whom Ayón identified himself throughout his life. 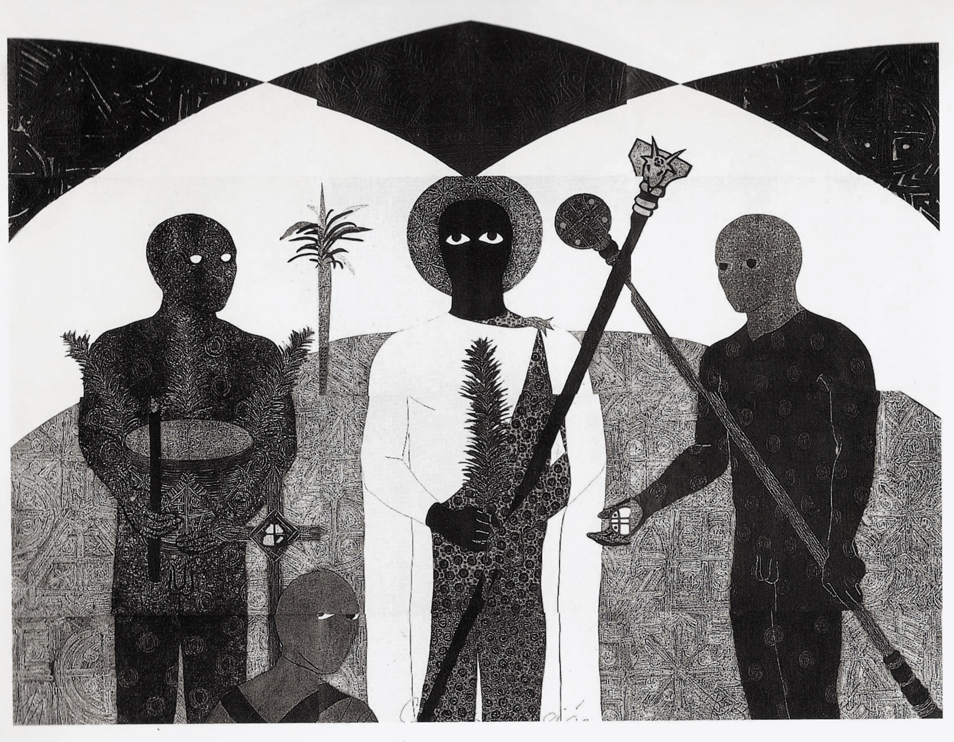 The Dominican artist presents, through painting, sculpture and architecture, an installation that refers to the physical and metaphorical constructions of the three variants of the name Sans-Soucis "Sans-Souci". The resting estate of Frederick the Great, built between 1745 and 1747 on the outskirts of Berlin, is the first. Second, the castle in Milot, Haiti, built between 1810 and 1813 by King Henri I. And finally, the Haitian colonel Jean-Baptiste Sans-Souci, a leading figure in the Haitian revolution, betrayed and murdered in 1803 for his rival Henri Christophe (later King Henri I) .

The work of Ana Mendieta (Havana, Cuba, 1948-1985) articulates political and philosophical concerns regarding the female body. On this occasion, the Berlin Biennial presents a series of drawings that the artist made at the end of her life. Its simple lines, represented in ink or graphite on paper, portray the organic curves of leaves and fruits, which carry a subtle, yonic nature that suggests a silent tribute to femininity and moves through its permanent vulnerability.

Lydela and Michel Nonó, better known as Las nietas de Nonó, travel from the San Antón neighborhood in Puerto Rico, where they have their workshop -before their grandfather's house- that also functions as a residence for artists and as a cultural center for everything the neighborhood. As a result of their workspace, Las Nietas de Nonó presents Berlin's Mechanical Illustrations, an approximation of the neighborhood on German soil.

The work consists of videos, objects, performances, masks and figures made of vegetable leather. This last -material characteristic of the research with kombucho made by the artists- has as an objective to dialogue with the clinical experimentations carried out by the government and the pharmaceutical industry of Puerto Rico about the bodies of black women. 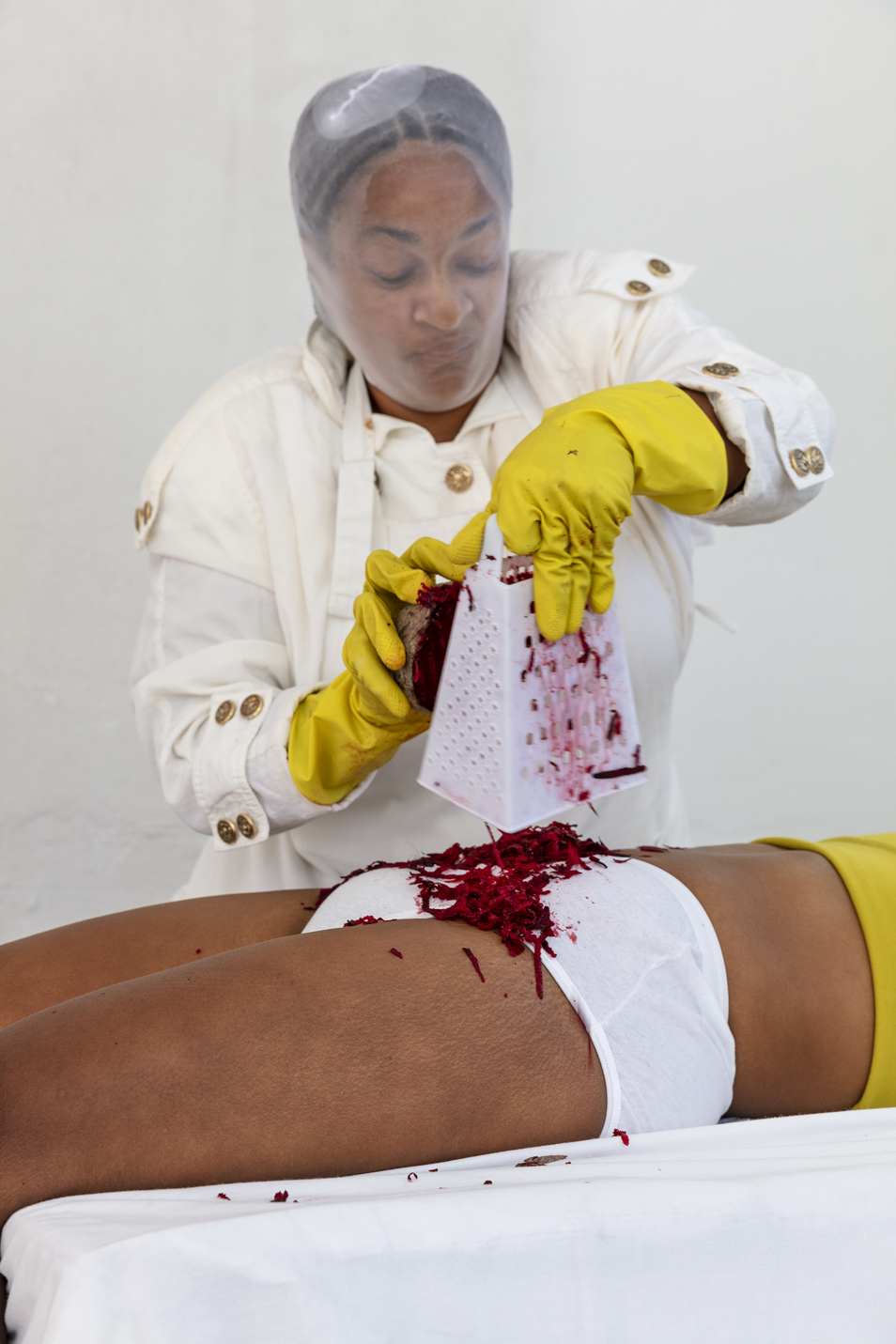 Camejo Where the heroes are is called the installation presented by the Cuban artist in this edition of the biennial. The work is a geometric composition with political references. Through 99 military decorations corresponding to Cuba, the United States and the dissolved Soviet Union, Where are the heroes question the value of decorations today. In addition, Gutiérrez Camejo (Havana, Cuba, 1987) questions whether these are really "a merit gained, if the simple fact of ostentation serves or if today they fulfill some civic or social function". From this perspective, the work dialogues with a military poetics that refuses to abandon the present and the future.

Sculpture, painter, photographer, draftsman and educator, Belli (Nicaragua 1964) combines her artistic production with collaborative learning tactics. At the end of the 90s, Belli began to sew fragments of clothing, fabrics and found textiles that resulted in pieces that allude to the works and the effects of female corporeity. From there arise the works Nidos de lagrimas, Bodas de Rapo and Desequilibradas, some of the works exhibited in the Biennial. 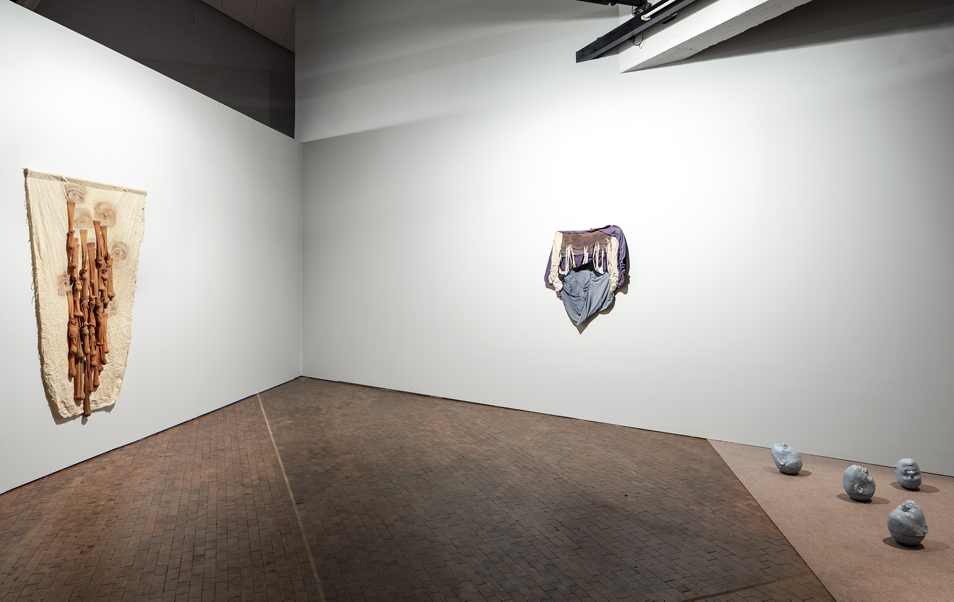 The young Colombian artist made an installation linked to the industrial bread production process. Collective Awareness, as the work is titled, consists of a series of rocks made of corn and clay baked in industrial furnaces. In this way, Murillo (Villa del Cauca, 1986) alludes to mass production systems, the culture of consumption and the basic sustenance of life.

The installation is part of the set of works found in the Akadamie der Künste (Berlin Academy of Arts). 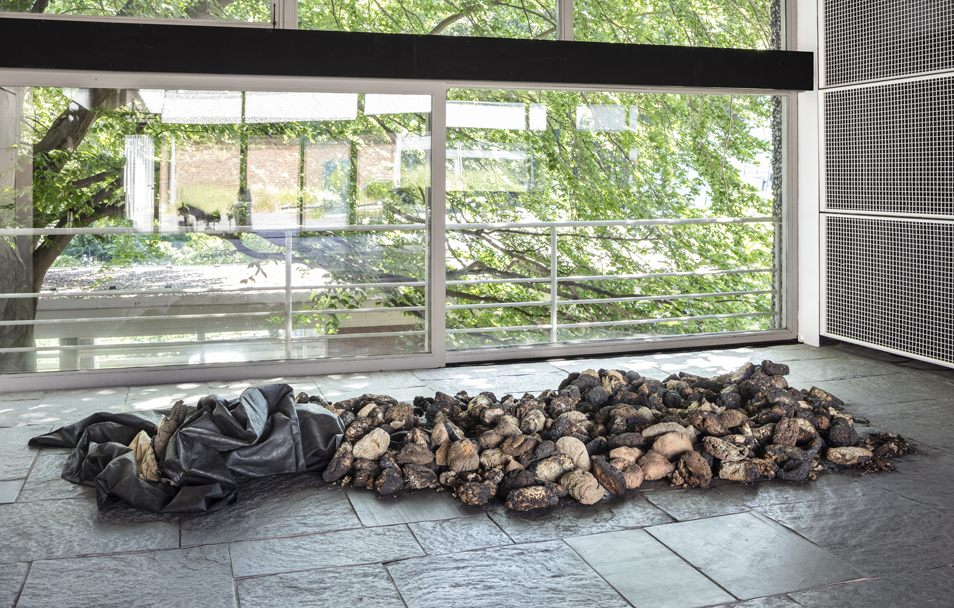