Latitude is an angle which ranges from 0° at the Equator to 90° at the poles. Lines of constant latitude, or parallels, run east–west as circles parallel to the equator and never touch. In Latitudes // Parallels, Juana Valdes utilizes the strategies of anthropological research to consider how the legacy of colonization is entrenched in institutions, hierarchies and, most importantly, objects. 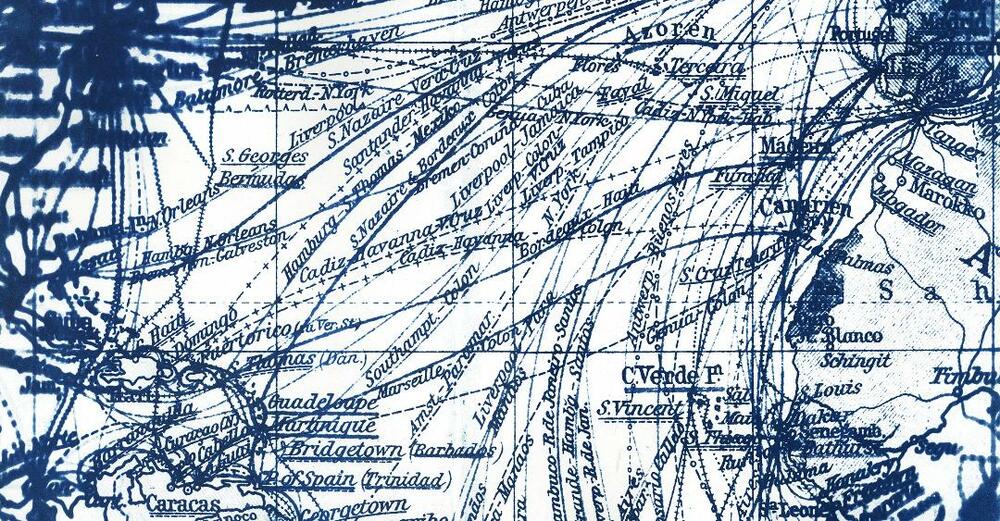 Reexamining the history of trade across the latitudes from 30° to the Ecuador encompassing countries, islands and continents from China to the Philippines, Sri Lanka, Somalia, Ghana, Venezuela, Cuba, Belize, Mexico and the Unites States. Research shows that 50% of the population live within the area between 20°N and 40°N, where also most of the world’s development and poverty related problems are located.

Wallpaper cyanotypes of maps and objects chart the ocean between Africa and Latin America, through their abstraction, these works allude to how the theoretical ideas of coloniality allowed for the erasure of human identity. Using digital printing of cyanotypes, image transfer of broken ceramics and photographs the work connects and anchors trade to countries, labor markets and commodity objects as they transgress the world on the trade winds and remaps the inequalities of our global economy.

Juana Valdes is an artist with a multidisciplinary practice that ranges from sculpture to printmaking. Her work explores matters of race, transnationalism, gender, labor and class. She has been included in group exhibitions at international venues including Pacific Standard Time: LA/LA, Museum of Latin American Art, Los Angeles; Siteline.2016, Site Santa Fe Biennial; El Museo del Barrio, and MoMa PS1, both in New York. Grant and Fellowships included the Joan Mitchel Foundation, The Ellies Creator Award, The New York Foundation for the Arts, National Association of Latino Arts and Culture Visual Artist Grant and the Pollock-Krasner Foundation Grant. She live/works between Miami, New York, and Amherst.