At the Modern Art Museum of Buenos Aires (MAMBA), an individual exhibition of Argentine artist Mercedes Azpilicueta is exhibited until 3rd of March. Through video installations and sound pieces, Cuerpos Pájaros (Birds Bodies) explores the hidden resources of expression: gestures, breathing and tone. 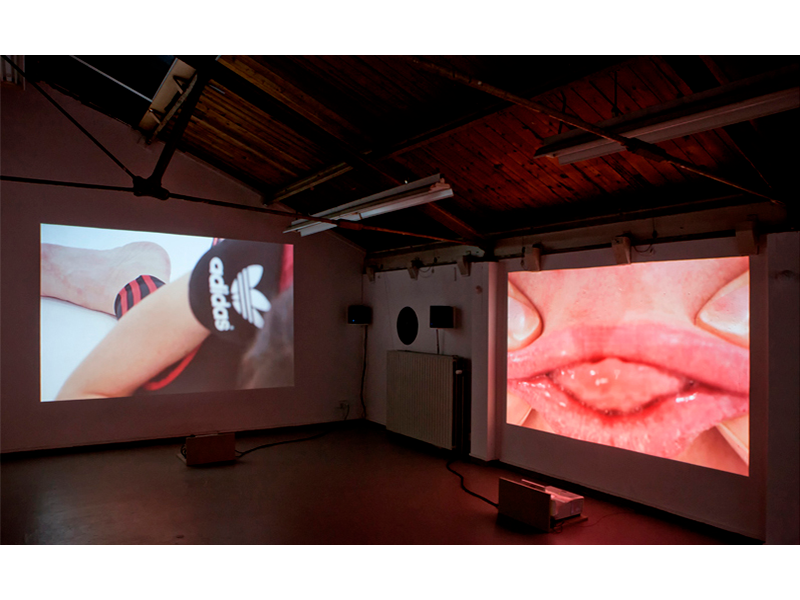 On the one hand, the name that gives title to the exhibition comes from an audiovisual piece shot in Buenos Aires streets. The piece was produced exclusively for this exhibition at MAMBA. In the work, Azpilicueta questions the characteristics that create a collective body "formed by diverse and demystified parts, not subject to normativity", expresses the curatorial text of the exhibition.

On the other, Cuerpos Pájaros places special emphasis on language properties -mainly the oral-. "The artist is interested in the living and changing part of speech, which reflects the personal and local ways of expression", they explain from the museum.

Starting from the interest in intuitive knowledge and feminine desire as sources of artistic creation, Azpilicueta appropriates foreign monologues - that of an auctioneer of works of art, for example - or reconstructs urban landscapes through her voice. Thus, the artist experiments with her own body as a "resonance box between personal and social space".

In short, the exhibition that is exhibited until March at the Modern Museum is an investigation over social constraints that shape our behavior, appealed directly from the corporality of the artist. Cuerpos Pájaros breaks physical and oral language conventions and makes a poiesis of the body to communicate.

Mercedes Azpilicueta was born in La Plata in 1981 and grew up in Coronel Suárez, province of Buenos Aires. Between 2002 and 2007 she completed a Bachelor of Visual Arts at the National University Institute of Arts of Buenos Aires. In 2009 she participated in the Artists Program of Torcuato Di Tella University, where she held clinics with Jorge Macchi, Mónica Girón and Alejandro Cesarco, among others. In those years she also participated in poetry and writing workshops with Mariano Blatt and Alfredo Jaramillo. In 2011 she traveled to the Netherlands to do a master's degree at the Dutch Art Institute / ArteEZ Hogeschool voor in Kunsten, Arnhem, and settled in that country. Between 2015 and 2016 she was selected as a resident artist at the Rijksakademie van beeldende kunsten, in Amsterdam, where she lives and works. In 2017 she received the Pernod Ricard Fellowship scholarship, thanks to which she made a residency at Villa Vassilieff / Bétonsalon, Center d'art et de recherche, Paris. In the last years she presented her works and performances in TENT (Rotterdam, 2015), Onomatopee (Eindhoven, 2016), Art Center Dos de Mayo (Móstoles, 2017), Museion (Bozen, 2018), MACBA (Barcelona, ​​2018), Jumex Museum (Mexico City, 2018), Villa Vassilieff (Paris, 2018), Pacific Standard Time: LA / LA, Getty Foundation and REDCAT / CalArts Gallery (Los Angeles, 2018), among others. Among her solo exhibitions are Todo fuera adentro, in Móvil (Buenos Aires, 2015); Geometric Dancer Does not Believe in Love, Finds Aspiration and Ecstasy in Spirals, in SlyZmud (Buenos Aires, 2016), and On Affection, in Nogueras Blanchard (Barcelona, ​​2017). Cuerpos Pájaros is the first great panoramic exposure of her work.