Currently on view, Fantasías Modulares presents a wide range of elements. Grinning triangles, lounging cows, and winking circles populate the vibrant, queer landscapes of Ad Minoliti’s imagined worlds. Trained as a painter, Minoliti draws on the rich legacy of geometric abstraction in her native country, Argentina, where geometry was used as a tool for picturing utopian alternatives. By combining abstraction with playful figuration, Minoliti upends familiar fairy tales, turning them on their head. She is particularly interested in disrupting pictorial cultural norms that uphold traditional views of sexuality and gender. 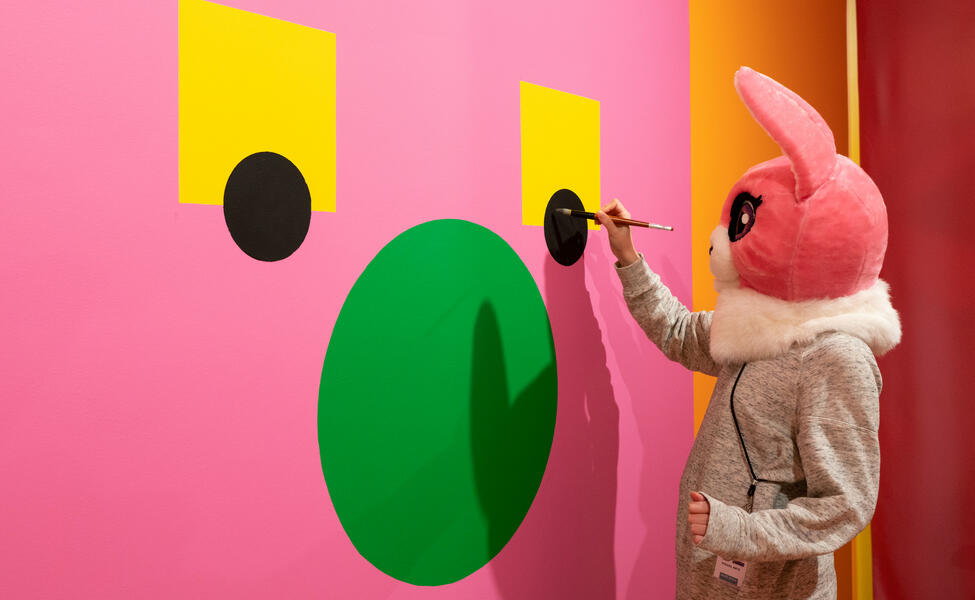 Populated by gregarious mice and helpful birds, fairy tales have always been the site of lively relationships and communities between multiple species. Ad Minoliti’s Fantasías Modulares, in its emphasis on the co-existence of many species, is no different. Yet unlike many of her childhood literary influences, she does not impose hierarchies between her hybrid beings — grinning triangles, lounging cows, and winking circles all populate the landscapes of Minoliti’s imagined worlds, with equal bearing and status. With her large painting Landscape (2020), installed at the far end of the gallery, the artist envisions a verdant forest: the quintessential fairy-tale scenery. In many fairy tales, nature and wilderness have been unwelcoming, scary sites, especially for female characters. Think of the perils that Little Red Riding Hood or Snow White face when entering the forest. Aware of how nature has often been portrayed as threatening, or a site of violence, Minoliti’s forest is a more welcoming and inclusive feminist terra.

That said, the artist does not necessarily assign primacy to “enfaced” non-human entities; faceless solid squares, rectangles described purely by lines, and gridded circles seem to co-mingle and congregate to create a distinct geometric species within her fantastical world.

Minoliti is interested in how fairy tales shape identity and social roles during childhood. Her work confronts and often challenges both the familiar imagery and story lines of these narratives. For example, her characters are frequently neither entirely male nor entirely female. Even more, her characters and figures blur boundaries between human, animal, and machine. In envisioning a place that is not dominated by human figures, her work unsettles anthropocentric views of the world and allows hierarchies between humans and non-humans to dissolve and re-form. This activation of other beings, entities, and objects generates a multitude of possibilities, which set the stage for a queer alternative, fairy tale, and perhaps art history

The artist also pays direct homage to the feminist and queer activists who came before her through the use of color. In a powerful chromatic pairing, vivid violet and brilliant green frame Fantasías Modulares’ entrance. For Minoliti, color is ideological— purple nods to feminism while green triangles signify the campaign for reproductive rights in Latin America.

Ad Minoliti (b. 1980) earned her BFA from the National School of Fine Arts P. Pueyrredón in Buenos Aires, Argentina. Her work has been exhibited at institutions such as the Staatliche Kunsthalle BadenBaden, Museo de Arte Moderno de Buenos Aires, Guangdong Times Museum, and the Museum of Contemporary Art Chicago. She has also participated in the Aichi Triennale, Japan (2016), FRONT Triennial, Cleveland, Ohio (2018), and the 58th International Art Exhibition of La Biennale di Venezia (2019). She has been the recipient of multiple awards and grants, such as the Ministry of Culture of Argentina, the Metropolitan Fund for the Arts of Buenos Aires, and Mexico’s FONCA Conaculta, among others. Minoliti splits her time between Buenos Aires and Berlin, Germany.