Since February 22 opens at Elba Benítez Gallery, located in the heart of Madrid (Spain), an individual exhibition of the Argentine artist Guillermo Kuitca. Under the curatorship of Sonia Becce, one of the most relevant and influential artists within the contemporary Latin American scene exhibits paintings and drawings made in recent years and drawings produced on the occasion of this exhibition. 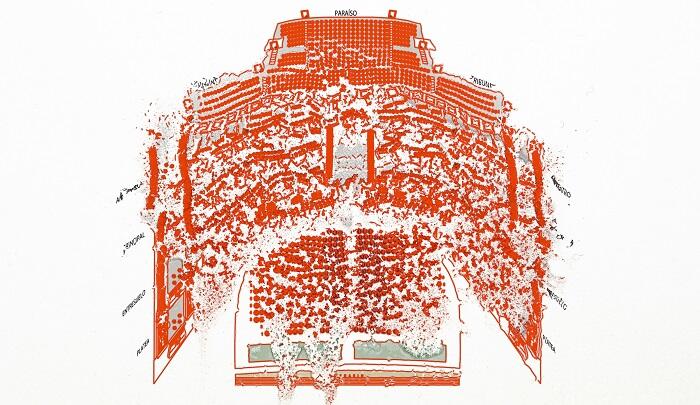 While the exhibition brings recent productions, it has in itself an ambition to highlight the thematic axes and technical characteristics of Kuitca. The Argentine artist, throughout his career has developed a work focused both on the use of cartography for pictorial experimentation, the defragmentation of images to manipulate social preconceptions (such is the case of the painting of the Madrid Royal Theater) and the reference to various fields such as architecture, music, photography, painting, theater and art history. The production of Kuitca, we can say, is focused on innovation and deformation of certain canons.

In the curatorial text, Sonia Becce tells an anecdote that perfectly explains the genius of Kuitca: "In 2003 the Colón Theater in Buenos Aires, invites him to make the scenery of the opera El holandés errante and has the opportunity to put on stage, in a sort of 3D version of his paintings, an imposing baggage conveyor belt, like that of airports, which is responsible for moving the Dutch ship, replacing the classic figure of it. With that decision, he brings to the 21st century the Wagnerian spirit that had proposed to found a new aesthetic two centuries before. "

Another characteristic element of the Argentine artist, present at the Elba Benítez Gallery exhibition, is the union of opposite elements: the bed, intimate space of the private sphere, and maps of huge cities, illustration of the public sphere at its best, are fused by Kuitca through arbitrary gestures that destine the viewer to get lost. Kuitca not only gives a twist to the usefulness of the map or the bed, but it puts in evidence some mechanisms of exclusion when sewing buttons in locations that you will never stand out on a map.

If you walk around Madrid, either for its tapas or for the ARCOmadrid fair - an event that positions the Spanish capital as the center of Western artistic activity - you should not miss Guillermo Kuitca's exhibition at the Elba Benítez Gallery. There the artworks of an artist with a singular look positions the viewer in an active role in relation to the work, making him question pre-configurations and conceptions of society in general and of their private lives in particular. The exhibition will remain until April of this year.