Lo que sucede aquí, no se queda aquí, is an installation of the Peruvian artist José Carlos Martinat that occupies the room of Carmen Araujo Art, made in alliance with the Revolver Gallery, Lima, Peru. The installation is thematically linked to the collective exhibition "Visual Onomatopoeias of Hard Times" currently exhibited in the house of Hacienda La Trinidad Cultural Park. 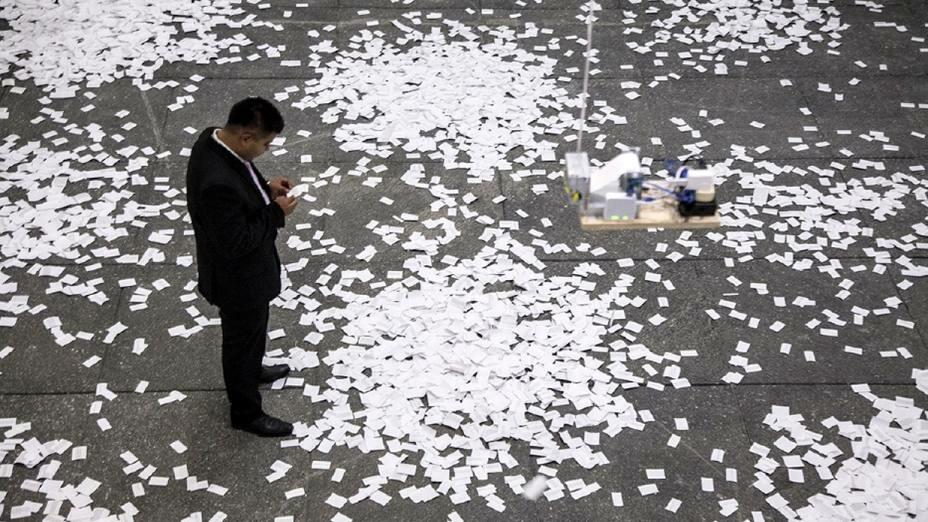 Immersed in the environments of the networks and the immediate communications, in the interface between the virtual and the physical, José Carlos Martinat proposes an installation in which it transforms the real space into a sort of "mechanism" or "machinery" of production of Content, based on the casual connection of outstanding information appeared in different local media. This is a complex "mechanism" that, based on a set of questions that attend to the Venezuelan political crisis and thanks to an algorithm that searches and processes information, the space is filled with possible answers that fall randomly to the floor, which They begin to construct an information ground, a communication base, in which ideas and opinions, news and events, overlap, are added uncountable to each other.

In the installation these stacks of papers that are in permanent growth give account of that discursive space illegible that conforms the atmosphere of the contemporary communication. The incessant production of printed information makes evident that the discursive space imposes itself, in the contemporary world, as the foundation of a reality in which the production of content always far exceeds the capacity appropriation and understanding, the permanence of the senses and meanings , Then, just as it is impossible to "read" all that accumulates in those printed piles, it is also unthinkable to delimit them as belonging to a subject, to a reality, to a situation.