KING FISH AND THE O.A.S.Y.S SOCIETY

Today (August 29) at 7 pm, MM Gallery presents El Pez Rey and the O.A.S.Y.S Society (King Fish and the O.A.S.Y.S Society), a photographic research project by the Argentine artist Jesu Antuña. After almost two years of research over Italian Giuseppe Di Silvestro figure and his stay in Cañada Rosquín, Santa Fe province (Argentina), in the mid-twentieth century, the exhibition develops and extends the story and the symbols that surround it from the archive Photographic and historical documentation. 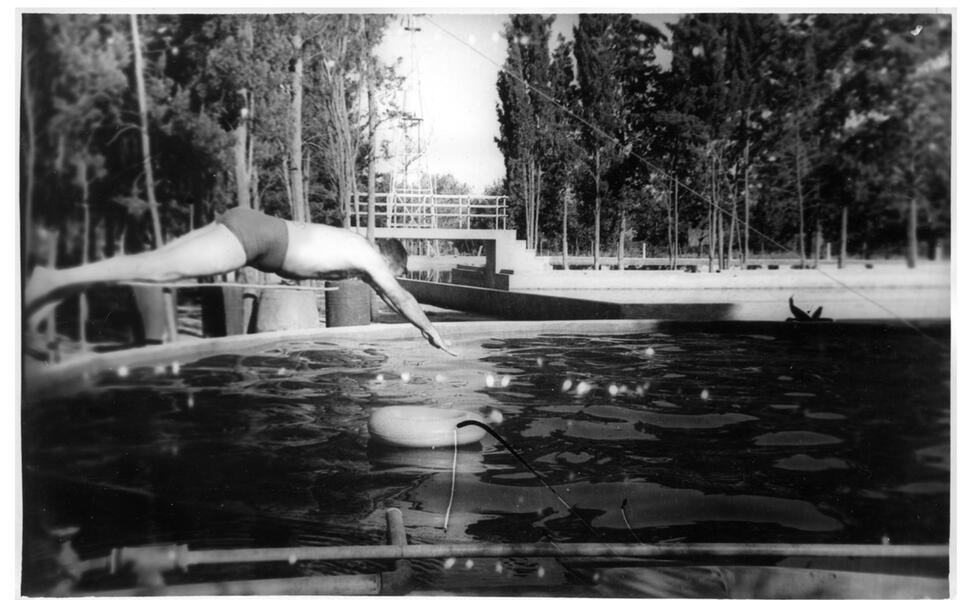 The artwork of Jesu Antuña is developed in an almost archaeological process. From an element of the landscape, in this case a swimming pool of an excessive scale located in a town of Santa Fe province, the project is introduced in steps and layers of meaning into the biography of a man - Giuseppe Di Silvestro - not only to unravel the urban myth, but also to deconstruct the foundational stories that make a community and the ambiguous character of the story.

According to the documents to which Antuña agreed and the interviews carried out with his team, the Italian who came from Sicily to develop what at first looked like a pejerrey hatchery in the town of Cañada Rosquín, left in a very short period of time (they estimate that his whereabouts in the town of Santa Fe was between 1962 and 1968), in addition to a gigantic pool, an unknown full of symbols of early Christianity, banquets for the rich people of the town, an unrecognized daughter and a disappearance without traces. In this amalgam of data, mostly unregistered, and built from the oral transmission of the people of Cañada Rosquín, Antuña puts in dialogue the archives found in the municipality of the town with the testimonies of the contemporaries of Di Silvestro and the visual record that remains of those years. In addition, El Pez Rey and the O.A.S.Y.S Society presents a series of photographs and audiovisual pieces produced by Antuña that, by mounting, add new interpretations and senses, as if it were another file, to this thick and uncertain story.

Jesu Antuña (1989) was born in Rosario City, province of Santa Fe (Argentina). Bachelor of Philosophy from the National University of Rosario, he is currently doing the Artists Program of the Torcuato Di Tella University. He is an art correspondent for the magazines Otra Parte and El Gran Otro. In 2018 he received the creation grant of the National Endowment for the Arts. He is director of the Luciérnagas collective project. He trained as a photographer in Gustavo Frittegotto's workshops and between 2016 and 2018 he carried out a work clinic with Gabriel Valansi. He participated in individual exhibitions in Argentina and abroad.

El Pez Rey and the O.A.S.Y.S Society, of Jesu Antuña with curatorship of Alfredo Aracil.