In the Fine Arts National Museum of Buenos Aires (MNBA), Julio Le Parc. Buenos Aires –Paris Transition (1955-1959), exhibition that reconstructs the first artworks of Julio Le Parc (Mendoza, Argentina, 1928) inaugurates. Under the curatorship of Mariana Marchesi, artistic director of the museum, the exhibition that opened today for the press inaugurates tomorrow and will take place until November 17 at the Temporary Exhibition Pavilion of the MNBA. 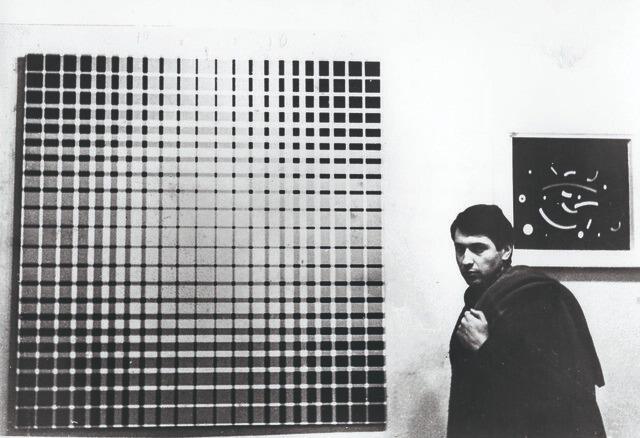 The period selected for the exhibition explores a young and experimental stage of the Argentine artist. Between the 50s and 60s, a Le Parc in his twenties finished his studies at the National School of Fine Arts Ernesto de la Cárcova and traveled to Paris through a scholarship granted by the French government. In the European capital Le Parc was successfully introduced to the Parisian art scene and by 1960 he founded the Groupe de Recherche d'Art Visuel (GRAV). Those years of training and research have been, as the exhibition illustrates, a turning point in Le Parc's career that at that time dedicated all his efforts to the production of visual and movement experiences, and the manipulation of light and vibration

Within that temporal frame, the artworks exhibited at the MNBA bring together paintings, watercolors and prints, some never before presented to the public. Thus, the museum proposes to pay tribute to one of the most influential international artists of kinetic and optical art. “The Museum welcomes this show tribute to the great Argentine master with the certainty that his creations, which are part of the art schools in which he enrolled his work - abstraction, kinetic art, conceptualism, op art - allow to resume dialogue with the universal tradition from a true language that captured the dilemmas of each era with the interpellant power of any radical novelty, ”said Andrés Duprat, general director of the museum.

Julio Le Parc. Transition Buenos Aires –Paris (1955-1959) is organized in three thematic axes –The years of training and the tradition of teaching, The revolt of students and the experimentation of forms and Paris 1959: the eye and the active surface- and the installation Instability. Architectural proposal, key work of the Argentine artist which belongs to the MNBA collection since his first exhibition there, in 1964.

“Julio Le Parc's relationship with the National Museum of Fine Arts has fifty-five years of history. The same rooms, but in 1964, hosted the exhibition The instability, which introduced to the Argentine public a proposal that, for the first time, put the viewer in a leading place, ”said the curator. “With the emergence of the 21st century, almost forty-five years later, Le Parc offered in the Fine Arts one of his greatest retrospectives - Dialoging with the light -, where he displayed the monumentality of his emblematic works. Today, the museum chooses to stop at a less explored stage of the artist's production, ”added Marchesi.

In addition, the exhibition at the MNBA coincides with the retrospective Julio Le Parc. A Visionary at the Kirchner Cultural Center (CCK), which celebrates the ninety years of the Argentine artist. With both exhibitions in two of the most relevant institutions in Buenos Aires, the Argentine city is an ideal setting to get to know and experience the work of one of the pioneering kinetic artists in the international contemporary scene.

Julio Le Parc was born in the province of Mendoza (Argentina), in 1928. Considered one of the great representatives of kinetic and contemporary art, he has always investigated the movement and the role of the spectator in art.

In 1954, he entered the Higher School of Fine Arts "Ernesto de la Cárcova", where he became involved with student movements. Four years later, he obtained a scholarship from the French government to study in Paris. In 1960, he founded the Center for Recherche d'Art Visuel (CRAV, later called Groupe de Recherche d'Art Visuel, GRAV).

For the 1963 Paris Biennale, Le Parc proposed labyrinths, tours and mirrored games for the viewer to actively participate. In parallel, he created the international movement Nouvelle Tendance. The GRAV was dissolved around 1968, the year in which Le Parc was forced to leave the country due to the revolt of French May. Since 1974, he made the so-called Modulations, paintings that were the result of his research in optical and kinetic art.

The first retrospective of his work was held in Buenos Aires, at the Instituto Di Tella (1967). Among his most important exhibitions, there are also Le Parc & Le Parc (1988), in the Palais de Glace, Julio Le Parc-Retrospectively (2001), in the Nara Roesler gallery in São Paulo, Brazil, and the retrospective carried out at the Fine Arts National Museum of Buenos Aires in 2000.

He currently lives and works in Paris.