JOAQUÍN TORRES GARCÍA: THE ARTIST, THE PHILOSOPHER, THE MASTER

Galería Sur of Punta del Este, Uruguay, turns 35 and celebrated it with a retrospective of Joaquín Torres García’s works, accompanied by the edition of a book: Torres García, Un universo vanguardista (Torres García, an avant-garde universe) 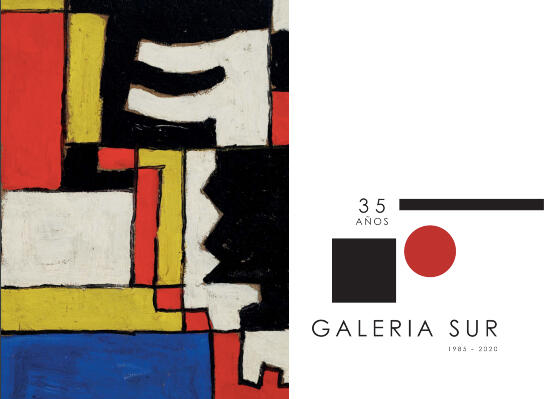 Martin Castillo, director of the gallery, writes about its beginnings:

“35 years ago when I was finishing the Social Communication course at the current Catholic University, like all young people I was faced with the dilemma of what to work on. Together with Graziella Zito, my wife, who at that time was my girlfriend, we had the idea to put up a gallery in Punta del Este to work during the summer. My father, Jorge Castillo, was a renowned private dealer. Highly respected in Buenos Aires, San Pablo, Madrid, Barcelona, ​​Paris and New York. He had represented the Torres García Family for several years, but had never had a public gallery.

The name of Sur, was already dancing, from the South Photographic Studio, which I had founded a few years before, in my photographer stage. In a few weeks we had everything ready. Manolita Piña de Torres García authorized us to use Torres García's inverted map of America drawing from the Escuela del Sur, for the logo. This is how Galería Sur was born on January 3, 1985.

The gallery has been adapting to the changes of the current world. Art fairs became a central element for the display of art. In these 35 years we have participated in more than 150 fairs, we organize more than 140 of our own shows and we edit dozens of catalogs and books. We actively collaborate with museums, biennials and foundations in different projects. We try to project the art of the Rio de la Plata to the world. I believe that we have contributed with important advances in relation to the opening of our artists to the world, to collectors and to museums, which now look at them with a different closeness.”

Today, Arte al Día remembers this significant artist with excerpts from that book and a tour of his work.

Torres García was an artist who had the conviction that creation was not a banal, fashionable event, but had much deeper roots, which came from Greco-Roman classical art and philosophy.

In 1930 the first issue of Cercle et Carré appears, where Torres draws up his Manifesto, Vouloir Construire. From there his Constructivist work is populated with universal signs, like the Egyptian codices, synthesizing symbols from other cultures and letters, which are inserted into cells of measured geometric structures, which are born from the spiral. Many times the background color planes appear, surely inspired by the stained glass windows that he designed in 1904 for the Sagrada Familia in Barcelona and the Cathedral of Mallorca by Antoni Gaudí.

He goes from the grayish color of the stone, to the ocher and then to the emblematic primary colors: red, blue and yellow. Just as in Paris in the 1930s, Torres' graphics became Iconic. In the American period (already in Montevideo) the constructs in primary colors, with Indo-American signs, are part of the DNA of modern Rio de la Plata painting and its influence on the rest of America, by action or reaction.

In short, Torres in Uruguay was a Master in the style of the great workshops of the Middle Ages, trying to insert a new art school in America. He was a Homo Faber, who built furniture, bars, floors, books, fonts, etc. according to his idea of ​​art. Always with a precise meaning, connected with the primitive, with the texture, with history.

He died in Montevideo in 1949, after a passionate life, dedicated to the battles for the essence of art with the main actors of the Vanguards, leaving a rich plastic legacy, of writings and thoughts on aesthetics and philosophy

The Telefónica Foundation, on another hand, has organized an exhibition where the works and symbols of Joaquín Torres García dialogue with the public: