Another edition of Experiencia Hilario (Hilario Experience) is open to collectors and fans. The auction house Hilario. Arts, Letters & Crafts will hold an auction on August 7 in which two exceptional issues of Prisma magazine, legacy of Latin American ultraism, of which Jorge Luis Borges was a participant, will be offered. 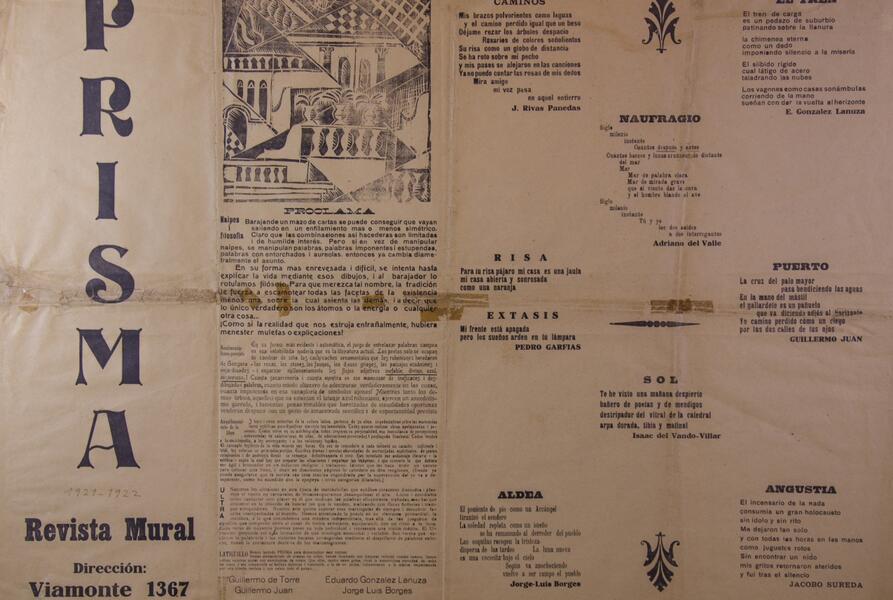 The two Prisma numbers are rarity. The editions that Hilario auction house were made by Jorge Luis Borges with his poet friends and his sister Norah. There were not too many copies because after its printing the group went out to paste them on the walls of Buenos Aires. According to the story, the first printings did not meet the expectations that writers had of the printing press. Thus, in the search for a new printing press, Borges came out with some copies to La Perla coffee -a breeding ground for the Buenos Aires bohemia of that time- and there he talked with the writer Macedonio Fernández, to whom he gave a number with a special dedication: "For the illustrious philosopher Macedonio Fernández // inexhaustible thinker giving your slender reflections in La Perla". Of the two copies offered in the auction, this is one of them, dated and signed by the most consecrated writer in Argentina and Latin America.

In addition to the two Prisma editions, the treasure of Hilario tops another unique piece of the Argentine writer: the first edition of El idioma de los argentinos (The language of the Argentines), illustrated by Xul Solar -friend of Borges and one of the most disruptive painters of the Buenos Aires scene of the twentieth century. Rewritten and even drawn by Borges, this piece belonged to the collection of Norah Borges and later owned by Antonio Carrizo, an unforgettable radio and television conductor who knew how to form one of the most notable libraries in Argentina, including the most important that existed about Jorge Luis Borges.

Also part of Experiencia Hilario are a series of drawings made by French sailors in 1839. Authors such as Adolphe D´Hastrel and Louis F. Leblanc, officer and rear admiral of a fleet that blocked the port of Buenos Aires during the war against Rosas government. The drawings were subsequently given to the writer and unitary politician Florencio Varela, exiled in Montevideo.

As for the photographic section, field in which Hilario. Arts, Letters & Crafts brings us invaluable treasures, next Wednesday's auction a series of photographs taken by photographer Marcos Zimmermann with a Peruvian ambrotype during the 80s and 90s. Also, a photograph of the Plaza de Armas of El Cuzco, and another from Machu Pichu, taken by Martín Chambi; and a collection of 52 glass photographs of the Scottish National Antarctic expedition (SNAE, 1902-1904) along with other views of the North Pole, an unmissable historical archive of polar excursions in the early twentieth century.

Finally, dedicated to collectors of miniatures, two tiny portraits made by the great French artist Jean Philippe Goulú, based in Buenos Aires at the beginning of the 19th century. The portraits correspond to Mercedes Rozas de Rivero, younger sister of Rosas, and her husband Miguel Rivera. Featured, both, she for being recognized as the first Argentine novelist, and he for his work as a doctor.