Until September 15 at the National Museum of Fine Arts (MNBA), in Buenos Aires, 30 oil paintings, watercolors and drawings by the Uruguayan artist Pedro Figari (1861-1938) are exhibited. Organized in collaboration with the National Museum of Visual Arts, in Uruguay, and the Figari Museum, Figari: mito y creación (Figari: myth and creation) is a retrospective exhibition of one of the greatest exponents of Latin American painting. 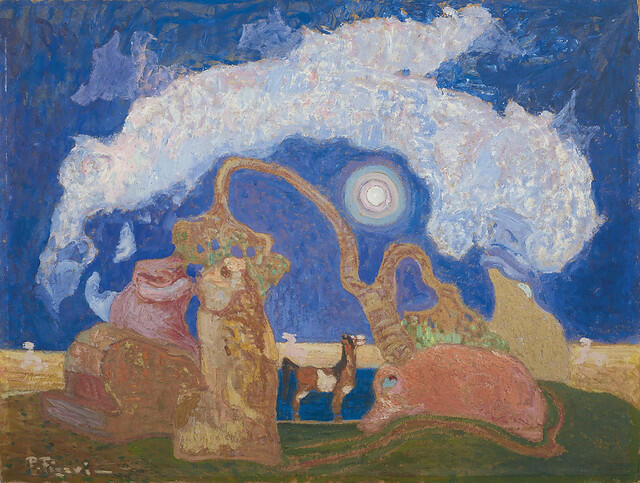 Under the curatorship of Pablo Thiago Rocca, director of the Figari Museum, the exhibition takes a tour of the various facets of Figari, both the periods of formation and the key moments that constituted his Rioplatense (from Río de la Plata) mythology. Likewise, the artworks of the Uruguayan painter establish a dialogue between the pictorial traditions of the region and propose a link within the plastic movements over the Río de la Plata: the Uruguayan, Brazilian and Argentine. Obvious the fact that its presence in the MNBA establishes a dialogue with the enormous collection of South American painting that the museum has.

The selection of works goes from his watercolors, made in 1890, to the drawings that illustrate his last novel, published in 1930. The exhibited works are organized in eight different sections: The River Plate Legend, Nocturnes and Twilights, Bullfights and games, Primary life (series of Troglodytes), The Other World, The Underworld, Crimes and History Kiria. "Figari made pictorial series ranging from the life of caveman to contemporary religious ceremonies, transiting through bullfights and passion crimes, among others, reviewing again and again his creative procedures," Rocca explained.

Figari: mito y creación was designed especially for the MNBA. It is an unprecedented exhibition that proposes to discover the concerns, the imaginary and the early reflection of the human condition that Figari, as a painter, lawyer and politician knew how to observe very precisely. For the director of the National Museum of Fine Arts, Andrés Duprat, it is a "work that has an immediate political character, inasmuch as it postulates the equality of the human race, beyond races and classes or identities".

The exhibition was inaugurated on June 29 and will be exhibited on the first floor of the museum until September 15.