Es Baluard presents The agony and the ecstasy

The exhibition can be visited at Es Baluard from July 2 to October 2, 2016. 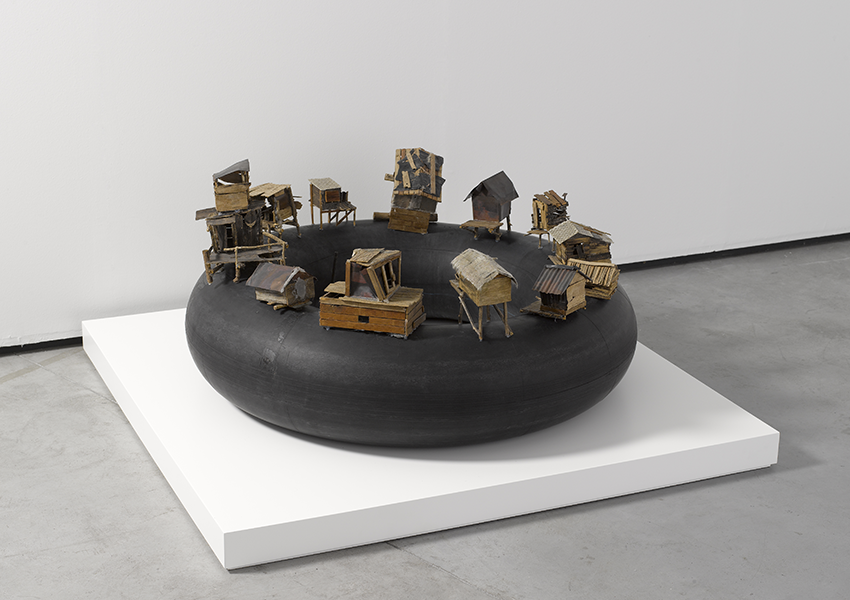 “The agony and the ecstasy” is an exhibition project that demonstrates the evolution of contemporary Latin American creation through its presence in the art collections of Mallorca. The genealogy that inserts its roots between conflict and aesthetics, the socio-political commitment and the evolution of thought-aesthetics in a remote geographical area but one which is, in spite of everything, connected to the way of understanding the fractures of post-modernity.

The exhibition consists of 92 works, including painting, photography, installations, etc. (Mostly from private collections), 55 Latin American artists. Curated by Nekane Aramburu, director of Es Baluard, with the collaboration of Gerardo Mosquera, this exhibition project shows the evolution of contemporary Latin American creation through its presence in the art collections of Mallorca demonstrating, as stated Gerardo Mosquera, the growing importance of private collectors in joint market, circulation and legitimation of art.

That a recent increase in attention towards Latin American art in Spanish academic circles is the result of their late development of post-colonial studies, taken from English-speaking resources, speaks volumes. In addition to the fact that, in this case, the former work more as a drawer in which to put away things “non-Western”, it is extremely difficult to analyse Latin America using instruments designed to discuss the cultural processes of the British colonial scene after the fall of the empire following World War II. The colonial era in Latin America concluded prior to the great British and French colonial –capitalist - enterprises in the 19th century. In Latin America, the colonisers settled, mingled and went native, making it impossible to make a clear distinction between the imposed colonial cultures, the indigenous cultures and those of the Africans taken there as slaves. So there is not, as there is in Africa and Asia, a clear interaction between the traditional environment and another, Western one, the ambivalences of which post-colonial thought has discussed. At the same time, in America there are indigenous communities that remain considerably excluded from the national projects and their mixed-race narratives.

Whatever the reasons, this exhibition demonstrates the growing importance of private collecting in the articulation of the market and the circulation and legitimation of art. Contrary to all other artistic manifestations, where the figure of the collector does not exist, the plastic arts are based on fetishized, luxury collectable objects and not on mass diffusion circuits, as occurs with music, film or literature. The latter art forms are by contrast sustained through products that can be downloaded or enjoyed live on the internet, as well as through the traditional collective events of concerts and film screenings, or publications in the mass media.

The works we call plastic or visual are still for the most part original physical objects or documents of actions or ideas certified as unique or in voluntarily-limited editions –by way of vicarious originals –which often contradict the possibilities of mass reproduction by the media in which they are created. This occurs with artistic video, which becomes a limited-edition collectable, or even performance, the right of which to be reproduced is bought and collected. These auratic, “anal”entities require hoarding in public or private collections, and the development of the latter have given collectors a prominent role.

The international growth of art fairs is an indication of the flourishing of private collecting and the increase in its power. This is expressed not only through the act of buying –which is an act of curating –but also in the public role of collectors and their heritage collection. And precisely in Latin America, institutions and public events organised on the basis of private collections have increased notably recently (cf. the Jumex collection in Mexico, MALBA in Argentina, the Cisneros collection in Venezuela) performing a valuable function, one that is highly beneficial in countries with scant public institutions which are moreover weak organisationally and economically. Collectors also take part in the boards of public museums, support their budgets and loan their works. In all honesty, the private accumulation of cultural assets implies social responsibility which many collectors have assumed for the purpose of good. Naturally, this responsibility also entails the exercise of power. In the case of this display, the willingness of a group of collectors to loan works to a public museum has allowed Nekane Aramburu to curate a highly interesting exhibition which would otherwise not h