EXPANDING ABSTRACTION: PUSHING THE BOUNDARIES OF PAINTING IN THE AMERICAS, 1958 TO 1983 AT THE BLANTON MUSEUM

The Blanton Museum of Art at The University of Texas at Austin will present Expanding Abstraction: Pushing the Boundaries of Painting in the Americas, 1958 to 1983 in the Butler Gallery until January, 2021. The exhibition explores material, conceptual, and formal innovation in post-war abstract painting through the Blanton’s collection of modern and contemporary art from the United States and Latin America. 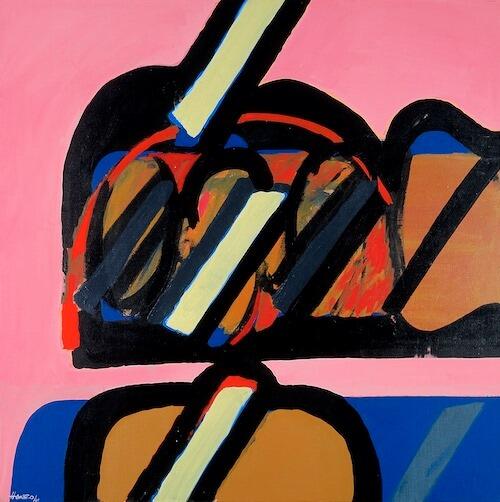 "This exhibition examines how artists continued to innovate in painting, even in an era when many were declaring the medium worn out and dead,” said Carter E. Foster, Blanton deputy director for curatorial affairs. “As contemporary avant-garde movements like Minimalism and conceptual art, and new genres such as performance art and experimental film and video, emerged in this time period, boundaries among conventional mediums began to blur more and more. Expanding Abstraction explores this moment of innovation through the lens of the Blanton’s collection—how painters experimented with new materials, especially newly available acrylic paint, and challenged conventions of flatness and rectilinearity—transforming the medium in the process.”

The exhibition has six sections that emphasize several trends and new approaches, many of them with overlapping qualities. They are Emphatic Gestures; Stained, Poured, Sprayed; Material Radicality; Between Painting and Sculpture; Opticality; and Geometries.

Stained, Poured, Sprayed: This section includes paintings by artists that poured, stained, and dripped paint on canvases, often working horizontally rather than vertically. Helen Frankenthaler’s early innovative technique of staining unprimed canvas on the floor with thin paint is represented with the work Over the Circle (1961); her work inspired other practitioners included in this section such as Morris Louis and Kenneth Noland. “Stained, Poured, Sprayed” also features the rarely seen Dorothy Hood painting Space Bolts (1967), inspired by the moment of space exploration in Houston, where she lived in the late 1960s.

Material Radicality: This section includes artists working with new and unconventional materials ranging from found objects to industrial supplies. Notable works include Richard Tuttle’s Light Pink Octagon (1967), a canvas dyed pink with no frame, brushstrokes, or front or back; María Luisa Pacheco’s Sin título [Untitled] (1966), a painting with a rich surface made from thick layers of oil paint applied with a knife or trowel and splinters of balsa wood; and Yayoi Kusama’s No. 62.A.A.A. (1962), one of her first three-dimensional assemblages that is made from egg cartons and mattress stuffing covered in a layer of sprayed and brushed paint.

Between Painting and Sculpture features works that respond to the question: “How can a painting be like a sculpture and how can a sculpture be like a painting?” Artists like George Sugarman and Alejandro Puente answer this question with three-dimensional works that have features of rectilinearity, gesture, and color that are often associated with painting. A highlight of this section is Untitled II (1961) by acclaimed artist Sven Lukin, which consists of a rectangular canvas stretched over a plywood frame to bow outward at the top and bottom; it is bisected by a wooden beam that similarly bows outward at the ends.

Opticalities: Artists working in the modes of Op Art and Kinetic Art produced visually stimulating works, often creating optical illusions or apparent movement through painted forms or physical materials. Some of the canvases included in this section seem to buzz and dance before the eye, such as Julio Le Parc’s 1972 Untitled or Richard Joseph Anuszkiewicz’s 1960 Plus Reversed. Other highlights of this section include Jesús Rafael Soto’s Paralelas vibrantes (de Série Síntesis) [Vibrant Parallels (from Synthesis Series)] (1979) and Tadasky’s C-109 (1964).

Geometries: This section includes works often described as “hard edge” or “geometric” abstraction—paintings with precise, flat shapes in varying combinations and designs and often expansive, large fields of color. This genre of painting had an especially rich history in Latin America. Here, Latin American artists who embraced geometric abstraction in diverse forms are featured in dialogue with their North American counterparts, such as Argentine artist César Paternosto alongside American artists Edwin Ruda and Dean Fleming.

Founded in 1963, the Blanton Museum of Art holds the largest public collection in Central Texas with around 19,000 objects. Recognized as the home of Ellsworth Kelly’s Austin, its major collecting areas are modern and contemporary American and Latin American art, Italian Renaissance and Baroque paintings, and prints and drawings. The Blanton offers thought-provoking, visually arresting, and personally moving encounters with art.