Desórdenes sistémicos: from Chile to Argentina at the Matta Cultural Center

Desórdenes sistémicos (Sistemic disorders) is an exhibition organized and coordinated by SÍSMICA (a public-private initiative that seeks to strengthen the presence and promotion of the Chilean visual arts in the world), the Association of Contemporary Art Galleries of Chile and ProChile, which proposes an approach to one of the most active and dynamic scenes of Latin American art today. The exhibition takes place at the Matta Cultural Center, in Buenos Aires, Argentina. 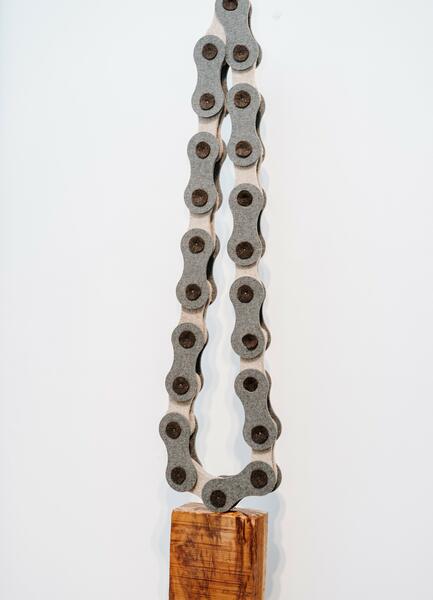 One of the works that form part of Desórdenes sistémicos is Órdenes sistémicos (Sistemic Orders), by Cristian Salineros: through steel constructions inhabited by canaries, the artist creates visual patterns from the life of birds in cages. In this way the work alludes to the control, the confinement and the links between behavior and space. The policies, limits or codes that affect the social body, from notions such as authority, vulnerability, shock, violence, body, utopia and death are some of the topics that explores this collective sample and it is from there that the exhibitiontake its name.

The artworks selected, propose -mostly- a questioning of reality where the voltage between chaos and order, the natural and the artificial, the living and the dead, give rise to breathtaking representations. These images are not presented as a refuge in the face of the crisis or the devastation, but as a sincere exteriorization of a deeply uncertain political and social time, where art becomes one of the best of the present seismographs.

Other projects exhibited are the answer to moments of social upheaval and citizen crisis. The project Glorias (Glories )(2017), by Christopher Cea, for example, consists of an installation that combines objects, videos and drawings produced from audiovisual materials found on the internet associated with marches and protests of May 21, the day that the Chilean president presents an annual state administrative and political center of the nation. The artist assembles a visual story where the artifice of the images (the characters, architecture, etc.) is a metaphor for the conditions of democracy. Similar to this work, the sculptures of Rodrigo Vergara, (Progress rhymes with order, order rhymes with repression) (2017), suggest a continuity between the idea of progression and repression.

On the other hand, the artist Salvador Najmanovich takes as its starting point the ceaseless bombardment of violent images: for Najmanovich, the pictorial support allows you to engage in different historical times, through an accumulation of dense atmospheres and sensory.

In short, the exposure which going on at the Matta Cultural Center, in Buenos Aires, it´s characterized by the diversity and eclectic approaches that the artists dealt with. Other actors of Desórdenes sitémcos are Neto, Loreto Carmona, Andrea Rodriguez Vial, Benjamín Ossa and Andrea Fischer.