At the Coral Springs Museum of Art in Florida, United States, Colombian artist Darío Ortiz (Colombia, 1968) presents Counterpoint. Under the curatorship of Luisa Cardenas, Ortiz's paintings question the aesthetic homogeneity of contemporary art and brings the themes of classical art to contemporary times. The exhibition takes place until November 9. 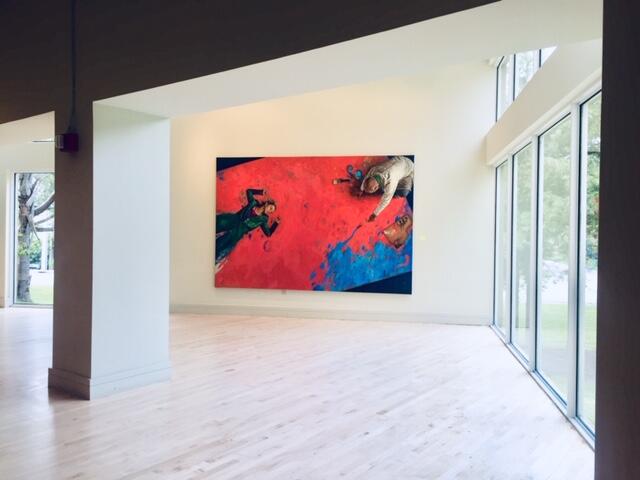 In addition to being a painter, Darío Ortiz has developed his work as a writer. Ravenous reader, his visual language lies in a network of religious and classical themes from the human body. Within that framework, the artist developed a series of paintings that put the human being as the central object of the oeuvre, making an ode to the body that functions as a resource of attraction and connection with the viewer.

As for the title Counterpoint - originally given to curator Rafael Alfonso Pérez y Pérez - it is an allusion to the concept of the same name in the field of music. It is called a "counterpoint" where improvisations and individual musical performances, together with vocal performances and all overt composition techniques, are held in a harmonious balance. " This concept extrapolated to the plastic discourse of Darío Ortiz properly describes the curatorial sequence, the versatility of works presented in the show and its selection describes the intention of the artista in providing a vast panorama of his plastic expression and concept,” explains the curator and adds: “Each element in his work plays a role an at the same time establishes a dialogue between them”.

Ortiz's work is characterized mainly by the use of contemporary symbols, but in constant conjunction with all predecessor symbols and art. Thus, his dialogue (discussion) with tradition and the present, says Luisa Cardenas, is the greatest legacy left by his work within the vast history of art. An attribute that reveals, paraphrasing the curatorial text of Cardenas, the degree of commitment of his artistic identity to the present and the current state of artistic production.

He was born in Ibagué, Colombia, in 1968. He formed as a self-taught artist. Since 1995 he writes in the newspaper El Nuevo Día and is the author of various publications such as Oscar Rodríguez Naranjo, The Painter of Beauty (1996), Neorealism (2000), Vásquez de Arce and Ceballos drawings (2007), A Brief History of the Arts in the Territory of Tolima (2007) and A Novel Painted (2008).

He lives and works in Mexico.