Until January 13th at Estancia FEMSA and Casa Luis Barragán an individual exhibition of the renowned Danish artist Danh Vo (Bà Rịa, Vietnam, 1975) is presented. Constructed by pieces and interventions created especially for this venue, Jardín con palomas al vuelo (Garden with pigeons) explores the architecture and the life of the objects and people who have inhabited Casa Luis Barragán a long it’s history. 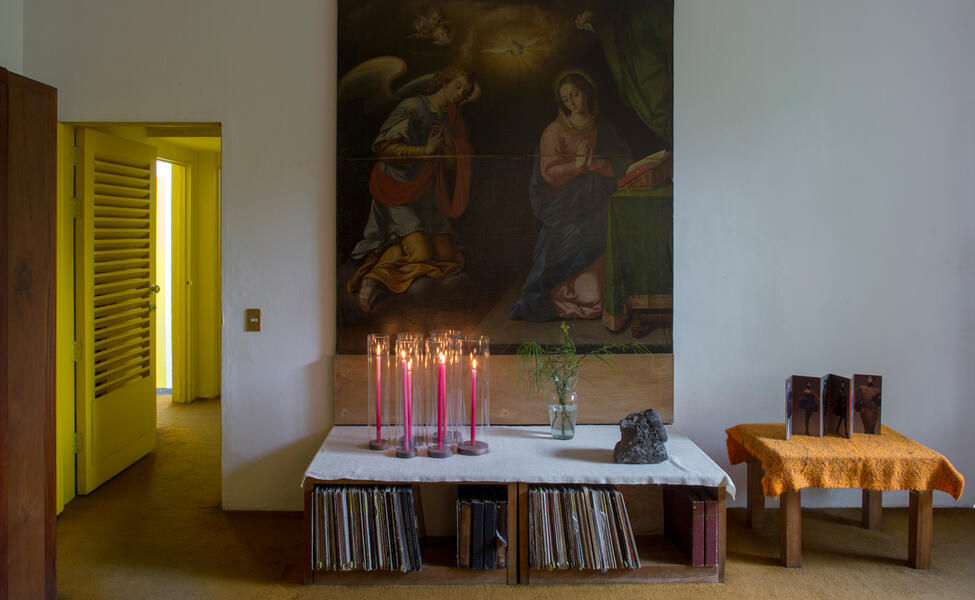 In the first part of the exhibition, Danh Vo reveals the work invisible systems behind the scenes to ensure the functioning of the house, as well as the conservation tasks to which the staff of the institution submits it. The artist proposes subtle alterations in maintenance routines, such as the removal of carpets to reveal the trace of light on the floors over the years, the accelerated restoration of some furniture and spaces, as well as the enabling of sections that they are kept closed to the public; It also displaces objects or exacerbates decorative gestures, such as the creation of floral arrangements by the house staff. For this, the artist has based partially on old photographs of the House, such as those taken by Elizabeth Timberland in 1952. In this way, the temporal layers that accumulate in space and the multiple transformations that it has had since its construction are revealed, thus signaling the impermanence of its museographic discourse and understanding Barragán's architecture as a living archive and a laboratory active of ideas.

The second part of the project consists of an installation for which Danh Vo has arranged, throughout the entire house, numerous beeswax candles made by master craftsmen in Oaxaca. In the process of preparing these, the original yellow of the wax is bleached by the sun for days. Then the candles are assembled, layer by layer and finally they are dyed with grana cochineal in different densities. The interaction of materials with the environment and its transformation over time is for the artist a constant source of fascination in his work.

The candles, on the one hand, allude to the historical lineage of the tincture with grana cochineal - a pre-Hispanic technique whose cultural use survived the Viceroyalty and was an essential part of the economy of New Spain - and, on the other, evoke with its ceremonial character the Catholic faith, which is a central theme both in Barragán's life and work and in Danh Vo's research, although the latter manifests itself very differently in both cases. By using these specific elements of the cultural history of Mexico, the artist thinks over colonization, globalization and resignification that occurs when objects are extracted from one context and "migrate" to another.

This installation will create new experiences of the Casa Luis Barragán for its visitors, as the candles will light up and will be consumed throughout the exhibition, which will allow knowing the interior of the site at sundown and will create a new dialogue of light and shadow inside.