Buenos Aires, May 2017 - Chandon surprises the year after year by inviting the most important contemporary Latin American artists to present a work in the Chandon Space. For this new edition of arteBA, which is open to the public from May 24 to 27, Chandon chose Eduardo Basualdo to offer a different experience to the visitors of the fair through his installation "Freelancer". In addition, Chandon is once again the sponsor of the ArteBA Young Quarter, the space of the fair where galleries and spaces that represent artists of young trajectory participate. 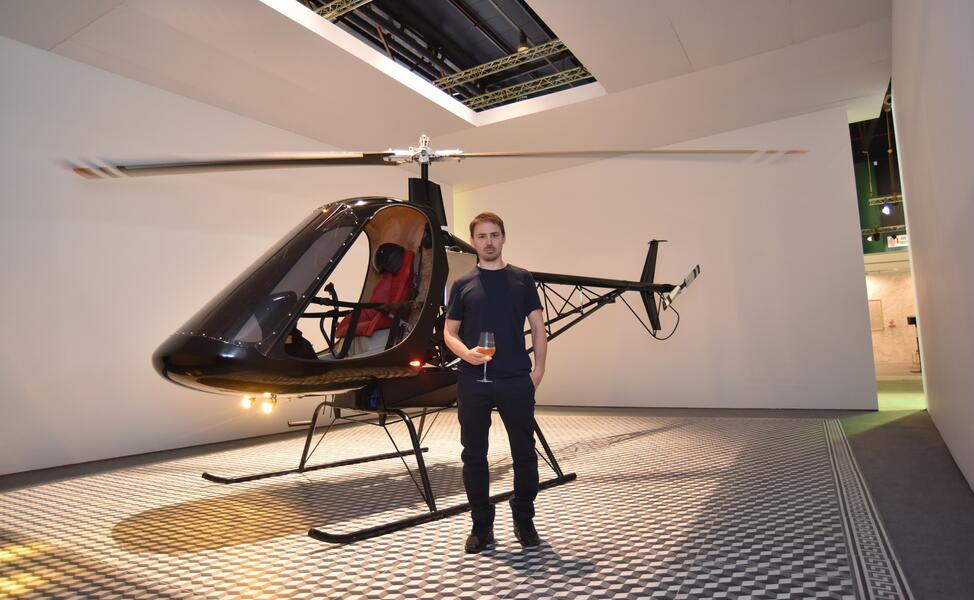 Throughout his career, Eduardo Basualdo's work was focused on the experience of space. His work attempts to question the principle of reality and the concept of limit. With this project the experimentation with the structures of the architecture continues and deepens the concept of transgression of the rule taking to a monumental scale. The facility, which is one of the biggest attractions of the fair with a plant of 7.5 x 9 meters.

People who come to the fair will find the space closed and a helicopter lit inside. The visitor has to enter the room, an architectural structure proposed by Basualdo to see and live the work. This is a walkable installation, where viewers can access the interior of the room and walk around the helicopter. The room does not have doors only can be entered by its vertices slightly displaced of its conventional squad. Income is narrow, as for one person at a time.

Once inside, it meets with the interior is in dim light, only illuminated by the light that comes from the outside. The center of the space is occupied by a helicopter on, with its blades spinning at low speed. It is a prototype of a craft helicopter, with space for a single person, which has a single type of checkerboard, similar to those used in the courtyards of the old houses of Buenos Aires.

According to Basualdo, "the helicopter is the only agent that can be independent of the rules imposed by the architecture we are immersed in. The helicopter can draw a straight line between an origin and a destination of the city without anything stopping it. If it was beyond the rules.It is a machine created by men that allow a behavior that is not of men: to be able to fly. "

In relation to the work and its link with Chandon, Basualdo argues that "the latent tension that is generated inside the bottle of Chandon by the pressure that establishes the sparkling on the glass bottle before being opened, that invisible force that can only Being perceived by the release that is generated at the time of uncorking is the same sensation that goes through the installation: objects in the relationship that maintain a balance that is a point of breaking.

Freelancer is an Anglicism commonly used for freelancers. The figure of the "freelancer" exceeds the description of a way of working to begin to define the profile of the new western citizen. A solitary, mobile worker with no territorial commitments that can be developed with plasticity in an uncertain world where institutions begin to disappear. The "freelancer" represents the volatile, deterritorialized citizen. An organism that rebels against the rules of space.

Basualdo chose a checkerboard floor for the installation. "Both the floor and the ceiling refer to what the patio of a house deserves.A private house, the typical chorizo ​​house of Buenos Aires.What you want to show is how this outlet can produce in privacy.It is not a machine That is bought but a machine that is produced in a house, and from there for sale, "explained the artist.

In addition to presenting Basualdo, in this edition, Chandon is once again the sponsor of the ArteBA Youth District, the space of the fair where new galleries and new, different or alternative spaces that represent artists of young trajectory participate.

Its goal is to open a space for young galleries, self-managed projects, temporary exhibition spaces and other non-categorizable platforms that refresh the Latin American scene. This section seeks to be attentive to changes in the ways of producing and experiencing contemporary art and in turn announces the future. Each of these projects is unique and does not conform to a single format of exposure or to a single way of thinking about the market: ways of doing adapt to contexts, either by enhancing artistic production on-site or by searching for ways to Co-management that privilege the ephemeral and the experiential. For many of these projects, sustainability is still a challenge, so your participation in this section is key to expanding your visibility and strengthening the valuable work you have been doing.

New galleries and new, different or alternative spaces that represent artists of young trajectory that are selected by a curatorial team conformed for this edition by Raúl Flores (artist and independent manager, Buenos Aires) and Miguel A. López (curator in chief of TEOR / Ethics, San Jose, Costa Rica, and co-founder of Bisagra, Lima).

As usual, Barrio Joven Chandon welcomes Argentine artists as well as a renewed group of international galleries that are seeking to strengthen and project the work of young artists from Latin America even further. From emerging proposals of Ecuadorian or Colombian art, projects from the Caribbean to the presence of a new Amazonian art that discovers other seductive aesthetics of the region. Among the participants of this edition are also spaces and galleries from various provinces of Argentina, such as Córdoba, Mendoza, Salta and Tucumán, who play important roles in their own contexts as dynamizers of critical artistic production. The desire of this year's Young Chandon Neighborhood is to be able to recognize their effort and commitment in the necessary work to expand the artistic discussions beyond the centralism that usually characterizes those countries.

Also stands out the presence of the performance: unlike previous editions, this year Barrio Joven Chandon will have performers and works associated with the performative, which invite a different involvement on the part of the visitors. In this way, Barrio Joven Chandon maintains its opening towards what escapes conventional radars and is positioned as a place where the determination of the artists themselves and the new initiatives configure a more daring environment to face the present.