From an extreme dialogue with the physical space of the Museo MAR (Mar del Plata, Argentina), Cristián Segura presents three large scale photography and a documentary short film that illustrate the site-specific performance carried out during 2017 in the museum. X-Museum has been produced by the Tandil artist for the museum’s special request so to be exhibited for a whole year (from December 15th, 2017, to December 15th, 2018). 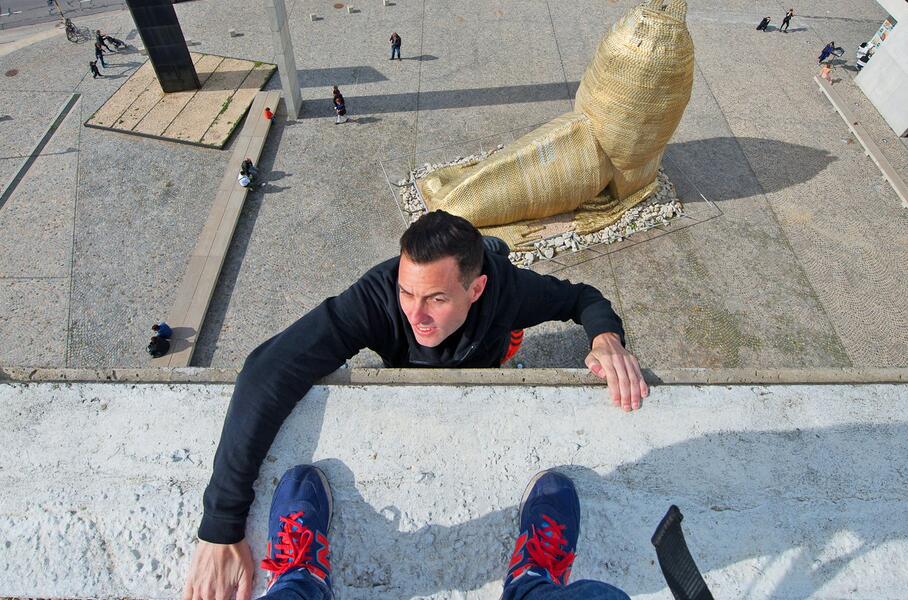 Considered as one of the most complex artists in the Argentine contemporary scene, Segura constantly alludes to the museography and the symbolic and patrimonial heritage these institutions represent. In this way, exploring Museo MAR’s limits, Segura exposed himself into danger situations as defying all that grandiloquence museums express. As explained from the museum: "This is a critical reformulation of the museum space through an extreme performance (on the terrace and hanging from his hands over the void) and the intervention of the central hall, with the photographic and video record of his feat, in monumental dimensions ".

After the performance the Argentine artist produced a series of photographs and a short film. The three images, enlarged on a large scale blackout (such as street billboards), hang in the entrance hall of the museum directly questioning the visitor who enters with a huge Cristián Segura I mage that puts the museum on its own scale.

It is under this set of relationships that the work of Segura must be observed. In addition, the small documentary shows the production process of the entire work and the artist's body dialogue with the museum, challenging the building with each step and each gesture. X-Museum is an excellent opportunity to get introduced to the work of one of the most innovative artists in the contemporary scene.

Know more about the art-work at: Cristián Segura.