On August 7 at 11 am Colombia time, the Museum of Modern Art of Bogotá (MAMBO), directed by Claudia Hakim, has organized a program within the framework of ARTBO Weekend for the launch of the book. In turn, the book was also released at the New York University’s  Institute of Fine Arts 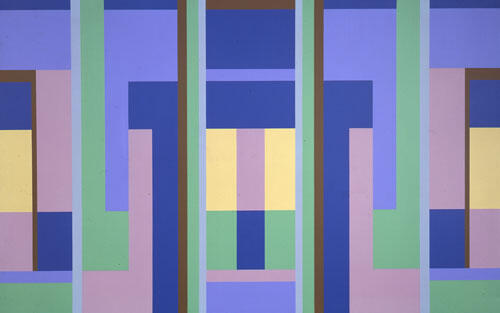 Last February, the exhibition Fanny Sanín, New York: The Critical Decade, 1971-1981 was inaugurated, the first exhibition to focus specifically on the work produced during the first decade in which the artist was living and working in New York. The exhibition, curated by three doctoral students under the supervision of renowned professor Edward J. Sullivan, presents a careful selection of paintings produced between 1971 and 1981 that show the evolution of her work and her handling of geometric abstraction. At the opening of the exhibition, the presentation of the first monograph on the artist's work also took place: Fanny Sanín: The Concrete Language of Color and Structure.

This book is published as an initiative of the Fanny Sanín Legacy Project. Founded in 2011, the Project aims to guard, preserve, exhibit and share Sanín’s art in relation to the study of art and history, and to preserve her role as an artist of historical importance.

Fanny Sanín's prolific career spans over more than five decades of dedication to geometric abstraction and color. Her meticulous paintings and paper studies have been widely exhibited in museums and galleries in Latin America, the United States, and Europe. Her works integrate the permanent collections of international museums such as the Los Angeles County Museum of Art (LACMA), the National Museum of Women in the Arts in Washington, DC, the Houston Museum of Arts and the Museum of Art in Warsaw, Poland among many others.

Sanín was born in Bogotá and it was there that she began her artistic career. In 1960 she graduated from Fine Arts from the Universidad de los Andes where she studied with Marta Traba, Juan Antonio Roda, Armando Villegas and David Manzur among others. In the 1960s she continued her artistic studies in the United States and London. She lived for a few years in Monterrey, Mexico and since 1973 lives and works in New York. Recently, the University of Antioquia awarded her the Honoris Causa Master of Arts degree in recognition of her important career and contributions to the field of art.

ENTER HERE TO WATCH THE BOOK LAUNCH AT MAMBO

Germán Escobar, Curator of MAMBO and Ana Sokoloff, whose office in New York was in charge of preparing the book titled Fanny Sanín - The Concrete Language of Color and Structure, will participate in the launching event. Chapters are written by Edward J. Sullivan himself, Professor at New York University; James Oles, Associate Professor at Wellesley College; Beverly Adams, Curator of Contemporary Art at the Museum of Modern Art in New York; Patterson Sims, independent curator; Clayton Kirking, independent curator; and Germán Rubiano Caballero, art historian. In addition, it contains an introduction written by Ana Sokoloff and an extensive Chronology. The book is in English, but includes a section in Spanish with all the essays, the introduction and the chronology.