Part of the transformations that the visual arts have had in Chile is what curator Pía Cordero seeks to show through the works of Claudio Correa and Sebastián Preece, who meet again since March 12 at the AFA Gallery in Santiago 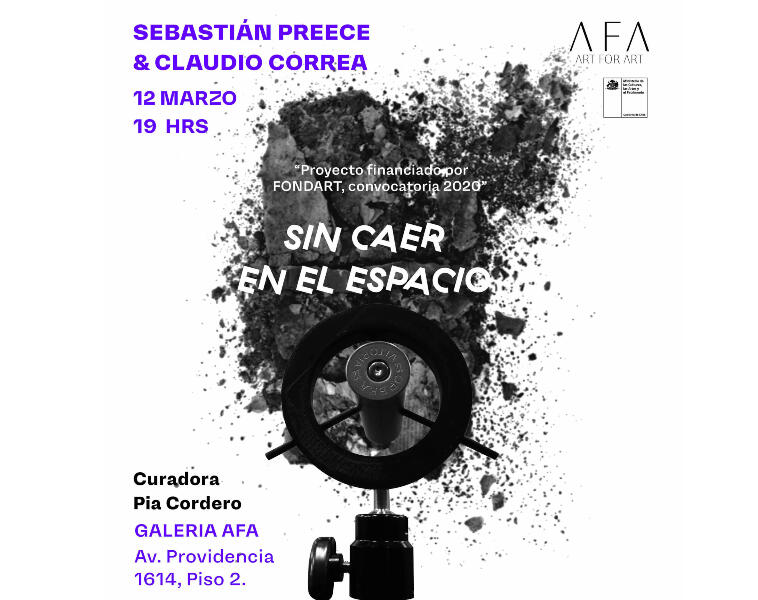 The dual exhibition Sin caer en el espacio (Without falling into space) considers the finding as a key piece for the conceptual and formal configuration of artistic work. While Claudio Correa collected residues of arms, professional and artisan, which is used in the revolt of the current Chilean crisis, Sebastián Preece built an installation from books found in an old winery, moldy by the passage of time.

In the framework of the social outbreak, which began on October 18, anyone can capture with their mobile phone what happens at the epicenter of this conflict, or the tension in the peripheral areas, and spread it on different platforms. The set of these media images builds a story parallel to reality and the revolt becomes, to a certain extent, an image of itself. Claudio Correa analyzes that feeling of staging after touring the Plaza Italia - turned into "Plaza de la Dignidad" - and its surroundings, collecting waste from that pitched battle that is fought almost daily in Santiago de Chile. The artist based in Barcelona produced independent and complementary works based on these findings: Gif de plomo (Lead Gif)  and  Guerra de juguete  (Toy War)

Regarding the focus of these works, curator Pía Cordero reflects: “The technological mediation of events increasingly characterizes our relationship with the world. Under this condition, images have become abstraction and have caused an abyss between the eye that looks through the camera and the world in front of it”.

Lead Gif is a light installation of some intervened microphone bases, which project the bottoms of tear gas and police pellets, seeming to cross them. The projections generate a brief animation around the reflections of the projectiles, which by means of flashes of light emulate the shutter of a photographic camera, suggesting analogies with the firing of a weapon.

In Toy War, the artist arranges a long tape of bullets, with more than 300 projectiles, which contain glass balls, or marbles, an element that in Chile is usually thrown as a projectile by students against the police. Correa reuses the balls, like a kind of war toy kit, where he opposes the polished metal of the projectiles with the dented glass of the marbles, to generate a shiny hybrid, which reflects light, contrary to the postmodernist architectural aesthetic of mirrors.

Both works establish a continuity with other recent projects by Claudio Correa, around consumerization and fetishism of violence. A diligent observer of the Chilean revolt, he does not concentrate his work on denouncing the evident inequality of conditions in the instruments of combat, but rather - even considering this circumstance - he seeks to stage the levels of aggressiveness of the conflict. Repressive weapons and reused household objects in the resistance, all this shapes a framework that relativizes violence, placing it on a level of play and even simulation. This stage adds the symbolic element in harangues, posters, slogans, performances, recorded and dramatized in a new imago mundi of incessant visual circulation.

Pía Cordero says: “violence is immobility. It is not action, but coercion; it is not alterity, but alienation. It is not only from the flesh or from the enervation of the skin, but also from language and images. Given this state of affairs, it is essential to ask ourselves: How to poeticize the immobility that stops and destroys our imagination?”

In his artistic work, Sebastián Preece usually explores in the field between nature and buildings; wastelands, ruins, abandoned shelters, etc. these are some of the contexts that motivate his research. And this time, in a similar artistic-archaeological record, he presents the installation Libros (Books), a work that arises from a discovery of books found underground and in a state of decomposition, in the ruins of an adobe house in the countryside, near the city. from Los Angeles (VIII Region of Chile). Preece was carrying out excavations in that building, disabled as a residence after an earthquake, and partly used as a warehouse. There he was looking for certain autobiographical traces for his De Los Ángeles y demonios (Of angels and demons) project, model of a family portrait, and was surprised by these specimens in different languages ​​and on subjects as diverse as medicine, poetry and some acts of the Chamber of Deputies of the Republic of Chile, dated between the years '50 and '70 of the 20th century.

After cataloging and photographically registering them, he kept these specimens in glass boxes and kept them as they were: humid, unpaginated, with earth remains and half destroyed by the presence of worms. Like that, he kept them for two years, under a regime of regular irrigation and exposure to the sun, allowing the wild vegetation impregnated to germinate, transforming into land of pages. When, finally, the conservation procedure was suspended, the books were dehydrated until they dried and cracked, obtaining from them papers of different weights.

Gathered together in the exhibition, Preece's Books make up micro landscapes, and encourage the exploration of analogies between geographical territory and textual territory. The artist usually observes the life cycles of things; Through long-term research, he discovers how they age or transform. It physically and psychologically removes the material memory of the places, delving, constructing and deconstructing, finding clues that can define what will finally be embodied as a work. In this way, past, present and future coexist in its procedure.

“Sebastián Preece paradoxically places us in the interferences, the ruins and the decomposing objects, which are outside the official account of the story - Pía Cordero analyzes - His Books, despite being turned into dust and pieces of paper, are articulated as a criticism of the centralist policy of Chile, whose visible face is impoverishment and peripheral marginalization”.

Without falling into space is a project financed by the National Fund for Cultural Development and the Arts (FONDART) 2019 and will be exhibited at the AFA Gallery until April 15, 2020. (Providencia 1614, piso 2).