The Bienal de São Paulo has put forward an initiative in which they publish a series of open letters directed to the audience, to share their reflections about the development of the Biennial. It is a correspondence that combines fiction with anecdotes from the past, official and reimagined situations, influenced, without a shadow of a doubt, by daily events. 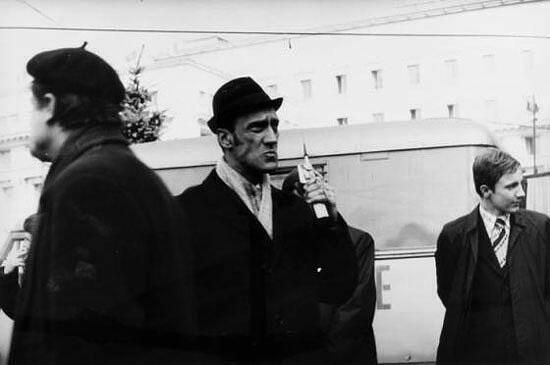 This letter was written by Ruth Estévez.

“I looked at him, he was aiming at my face”

I ended my letter some weeks after having traveled to Santiago de Chile on October 18, 2019, to give a lecture in the context of another biennial. As destiny would have it, I stayed in a sixth-floor hotel room overlooking the public square known as Plaza de Italia, amidst civil protests that were beginning at that moment, triggered by rising prices of mass transportation and other basic products. This crisis had been simmering at low heat for a long time, having broken out previously in the student revolts of 2011. Many citizens, fed up with the situation, went out into the streets to demand social justice and to denounce a rightist government that was indifferently setting the stage for the collapse. The authorities had been camouflaging the reality behind a supposed economic tranquility built on a fictional “oasis” which, on top of everything else, they aimed to hold up as an example for the rest of Latin America.

As a response, the government quickly deployed the army into the streets. I got goosebumps seeing the soldiers moving along the avenues of Santiago, with those tanks that had awakened from their slumber. The city, sleepwalking and subdued during the night, was set to explode at the first light of day. A curfew was imposed and most people chose not to go out, while some accepted the challenge – perhaps needing a physical outlet in the context of oppression and fear. Coincidentally, the civil insurrections that occurred in various places around the country took place in parallel with those of other cities around the world. What many saw as an effective group mobilization, others considered to be nothing more than an analgesic for the masses, which wound up normalizing and dwindling little by little.

In Chile, in 2019, the security forces shot at the eyes of the protesters. The result was a historical number of lost and destroyed eyes by the use of nonlethal weapons: pellet guns, as part of a protocol derived from the training of Israelite militias. Institutions had thus decided to literally tear out the eyes of the citizens, and to test whether, in the darkness, they would more readily get use to the constant surveillance.

In an effort to illustrate these aggressions, I wrote a letter that intercrossed excerpts from modern-day newspapers and eyewitness accounts with figures from fictional literature: Lina, the protagonist of Peruvian author Clemente Palma’s classic short story by “Los ojos de Lina” (1901), who tore out her eyes so that her lover would not be afraid to look her straight in the face; Olympia, the romantic automaton from the tale by E.T.A. Hoffman (1816), whose inert look made the living tremble; and the Saint of Syracuse, Lucia, who presented her own eyes to a person infatuated with how she looked, so that he would literally leave her alone. These were all women who mutilated their own eyes to walk freely and at the fringe of the male gaze, which did not dare to look them in the face.

I finished the letter in January and was waiting for it to be published in March. Just a few months later, the Chilean government decreed another curfew, between 10 p.m. and 5 a.m. throughout the national territory, as part of a new package of measures to try to slow the spread of Covid-19.

The situation of surveillance is once again normalized, apparently for the good of all society. The people stay at home to prevent the spread of the disease, hoping that this will end, amidst an insidious uncertainty. In the street, we warily watch each other out of the corner of our eye, and feel an uncontrollable repulsion, trying not to breathe the air of anyone nearby. It is recommended that we do not say “social distancing,” but rather “physical distancing.” The idea is to stop being together for an (indefinite) period and to reinforce the solidarity bonds that unite us. The streets of Chile, and those of many other cities, are now in silence, waiting for the day when they can once again spring back into activity. Those who can, dive into the world of remote work. Those who do not have this luxury, circulate while trying to avoid each other. We think that we are in a different state and any sort of normality now looks suspicious to us. The balance has broken, along with that line that used to connect our home and our places of work. The “discipline” of caution is now topmost in our minds, and for an instant we have the impression that before all this happened, we were free.

In 1975, Romanian artist Ion Grigorescu went out into the streets of Bucharest to photograph the citizens who were in the streets by the hundreds, exercising – obediently – their adhesion to the regime. With his camera hidden on his hip, Grigorescu surreptitiously shot photos that contrasted the bored looks among the crowd with the steely gaze of the members of the secret police who were supervising them. Electoral Meeting (1975) is the only thing that I have maintained from that letter which, written a few months ago, now seems out-of-date.

From the challenging look to the fearful one. From the voluntarily shutting of eyes to their purposeful mutilation. From the lost eyes to those which know very well what they are aiming at. Eyes watching from windows, controlling who is in the street. Eyes that indicate where we are, to keep us safe. Whether our eyes are open or shut, the day after will still arrive. Even though it now seems that day and night are only a mere lighting trick.