BETWEEN PERU AND GERMANY- TIME GOES BY: REBECCA HORN AND ANTONIO PAUCAR

The world is out of kilter. What form might international artistic and cultural exchange take on during a global pandemic? ifa Gallery Berlin takes advantage of this moment of immobility to place works from the ifa (Institut für Auslandsbeziehungen) collection in a contemporary context. 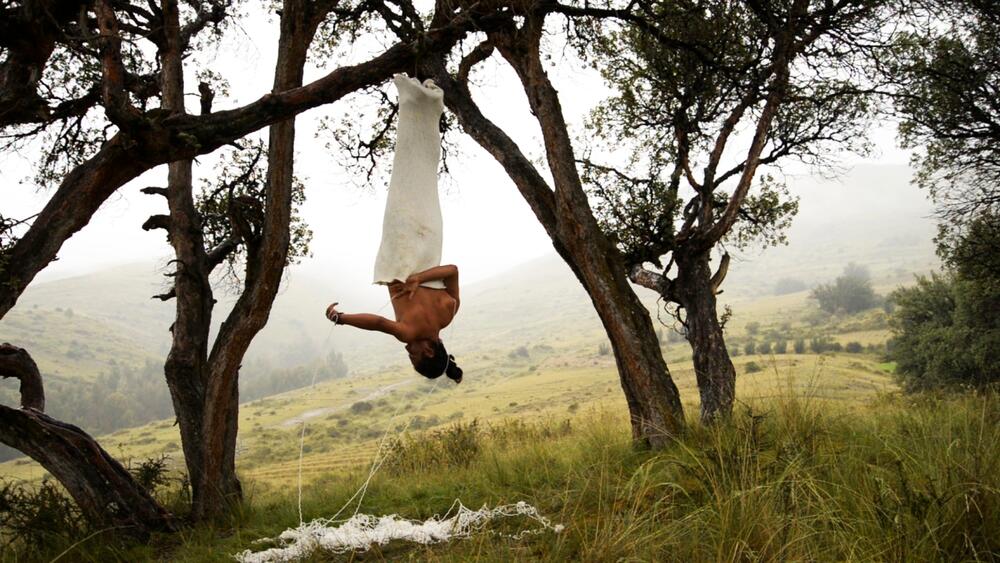 In the current climate, the unsettling yet touching works of Rebecca Horn take on a new significance. Her films, performances and sculptures open up a space between the poles of life and death, past and future, interior and exterior, human and machine. Horn not only influenced a subsequent generation of artists; she actively sought a dialogue with them.

The exhibition presents such a dialogue with her master class student Antonio Paucar, an artista who lives between Berlin and Huancayo (Peru). In his performances, Paucar moves through private, public and political spaces and landscapes that are both culturally and symbolically laden. He waits for change, senses transience, the power of the unconscious, sows memories so as not to forget. In poetry they find a shared language of proximity, both transcending bodies and boundaries. Therein lies their vulnerability—and their strength.

Antonio Paucar, born 1973 in Huancayo, Peru, studied fine arts at the Kunsthochschule BerlinWeißensee and the Universität der Künste Berlin (with Prof. Lothar Baumgarten and Rebecca Horn) as well as at the Chelsea College of Arts and Design in London. In 2005, he finished his postgraduate studies at the UdK (adviser: Prof. Rebecca Horn) and has been active as a visual and performance artist. He has been exhibited in Europe, Peru, Japan and Mexico. In 2013 Paucar won the LARA (Latin American Roaming Art) with a residency in Manila, Philippines with the Metropolitan Museum of Manila.

Rebecca Horn, born 1944 in Michelstadt, Germany, has created an evergrowing oeuvre comprising performances, films, drawings, texts, sculptures, and installations since the early 1970s. The inspiration and the force field of her work lie in the human body. She presented her first performances at documenta 5 in Kassel 1972, and since then her works have been shown in numerous solo exhibitions, at leading international institutions, such as large retrospectives at the Guggenheim Museum in New York (1993), Tate Gallery, London (1994), Nationalgalerie Berlin (1994), Martin-Gropius-Bau Berlin (2006), as well as the Museum of Contemporary Art Tokyo (2009) and the Centro Cultural Banco do Brasil in Rio de Janeiro and São Paulo (2010). In 1989 she became the first female professor at the Berlin University of the Arts. For her work, Rebecca Horn has received many awards and honours. In 2010, the artist founded the Moontower Foundation as a place to exhibit her own work and to support younger artists.

ifa (Institut für Auslandsbeziehungen) is Germany’s oldest intermediary organisation for international cultural relations, having celebrated its centenary in 2017. It promotes a peaceful and enriching coexistence between people and cultures worldwide. ifa supports artistic and cultural exchange in exhibition, dialogue and conference programmes, and it acts as a centre of excellence for international cultural relations. It is part of a global network and relies on sustainable, longterm partnerships.