On view 24 June - 15 November, 2020, the exhibition is curated by Roland Wetzel. It features the upcycling of death instruments into musical instruments 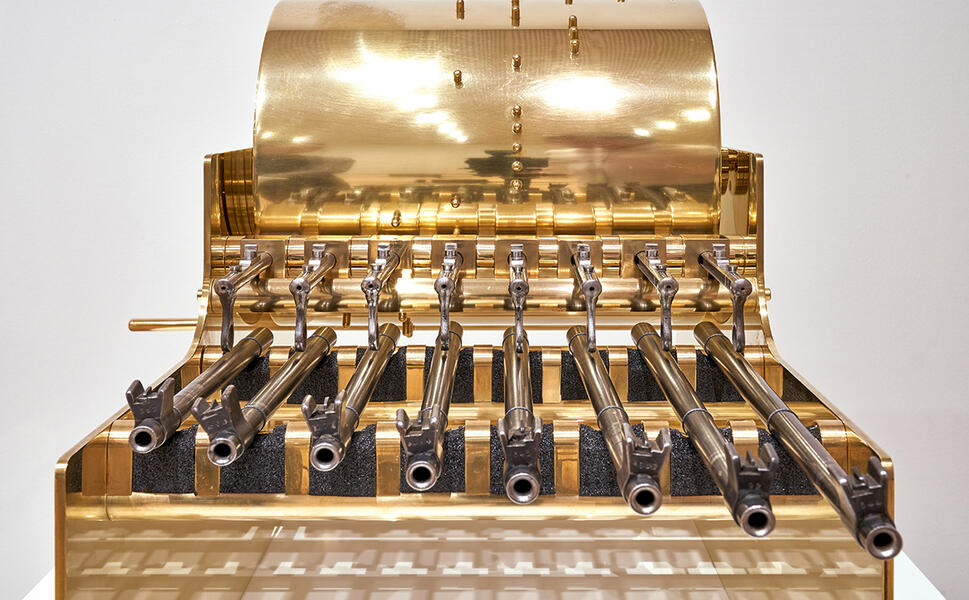 For his works, Pedro Reyes (b. 1972, lives and works in Mexico City) uses architecture, sculpture, video, performance, and participation to promote collective and individual power of action in political, social, ecological, and educational situations. His projects take place in the research field between a socially shaped understanding of architecture, the sensual and symbolic dimension of sculpture, and a decidedly political stance that adopts a radically humanist position.

Reyes attracted international attention in 2008 with his project Palas por Pistolas, for which he worked with the local authorities of Culiacán, Mexico, to exchange weapons from the local population for coupons to purchase domestic appliances and electronics, melt these weapons down, and recast them into 1,527 shovels to plant trees. Since then, these actions have continued both in the local environment and with international cultural institutions.

Reyes’ invitation to develop a new work for Museum Tinguely follows on from an earlier work. For the work group Disarm, in 2012, he was able to use 6,700 weapons confiscated in the Mexican drug war and transform these into musical instruments. This led to the conception of a multi-part weapon-instrument ensemble Disarm (Mechanized), 2012-13, which plays percussive music pieces in a mechanized and automated way.

“Weapons are the rule of fear, and music is the rule of trust — both entail creativity and technology, but one is built to oppress others, and the other is a form of liberation. These sculptural operations are meant not only to transform matter, but to lead to a psychological transformation, and hopefully, a transformation of society.” – Pedro Reyes

Both projects Palas por Pistolas and Disarm emerged from the specific situation of the Mexican drug war. However, the commercialization and proliferation of weapons is a worldwide problem that Reyes addresses with his new body of work Disarm Music Box (2020). Criticizing the ever-increasing accumulation of weapons throughout the world from a pacifist perspective, this newly created group of works acquires weapons from specific manufacturers and then destroys them in order to create resonating bodies from their barrels and create music boxes. They play well-known, classical music pieces from the respective manufacturer’s country of origin. A musical box made with Glock pistol parts plays Mozart, Beretta barrels Vivaldi, while Reyes's weapon of choice for Swiss songwriter Mani Matter is the Carabine. Reyes is focused on «upcycling» – transforming an instrument of death into a musical instrument that stands for dialog and exchange.