Uriburu´s work in land art was aimed at raising consciousness about environmental issues such as water pollution. 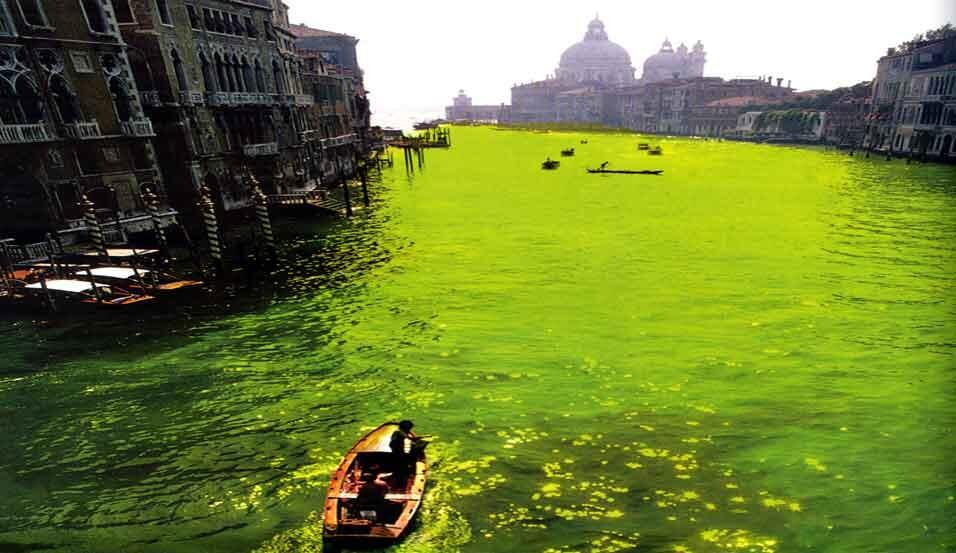 Nicolas Garcia Uriburu was an was an Argentine contemporary artist, landscape architect and ecologist. A pioneer in what became known as land art, he created a montage in pastel colors over photographs of the scenes in 1970, allowing the unlimited photographic reproduction of the work for the sake of raising awareness of worsening water pollution, worldwide.

He was invited to the prestigious Venice Biennale in June 1968, where García Uriburu dyed Venice's Grand Canal using fluorescein, a pigment which turns a bright green when synthesized by microorganisms in the water. Between 1968 and 1970, he repeated the feat in New York's East River, the Seine, in Paris, and at the mouth of Buenos Aires' polluted southside Riachuelo.

García Uriburu applied his fluorescein treatment on such diverse waterways as Paris' Lac de Vincennes (1971), the Trocadéro fountains (1972), the Port of Nice (1974) and the Port of Antwerp (1974). He continued to devote his art to the portrayal of endangered species and habitat loss, and was honored with a Grand Prize at the Tokyo Biennale in 1975. In 1981, he used an appearance at the Kassel Documenta 7 exposition to dye the Rhine, and joined German artist Joseph Beuys in planting 7,000 oaks. He and Beuys share views on Humanism, social philosophy, ecology, and libertarianism.

García Uriburu returned to Buenos Aires in 1982, following which he planted 50,000 trees. Remaining active in the city's tree-planting effort, he turned to portrait art and in 1993, was invited to the renowned Ruth Benzacar Gallery to present Utopía del Sur (Southern Utopia), a display devoted to his cause.

Still active in his cause in Argentina, García Uriburu has directed tree-planting efforts in neighboring Uruguay and has organized protests over the unabated degradation of Buenos Aires' industrial Riachuelo waterway, jointly with Greenpeace. He also teaches secondary school students and presides over the Foundation that bears his name, which displays his art and houses an extensive ethnographic museum devoted to Pre-Columbian art.