El Parque de la Memoria - Monumento a las Víctimas del Terrorismo de Estado presents in the PAyS room the exhibition "Destierro" by Anish Kapoor. The artist arrives in Argentina and exhibits for the first time in this country a sample designed especially for this space of art and memory. 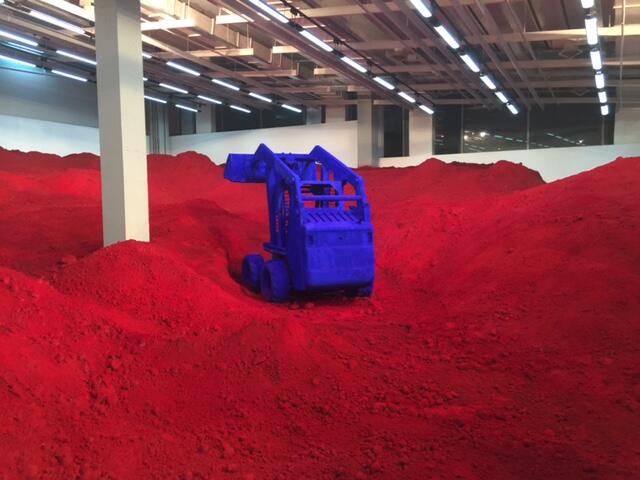 Born in Bombay in 1954, and based in London, Kapoor is one of the most relevant contemporary artists on the international stage. With the curatorship of Marcello Dantas, "Destierro" consists of three works: "Imagine Blue", "Anxiety" and "Exile", which form a conceptual set in which Kapoor problematizes the relationship between matter and perception. Its site-specific also seeks to link the exiles of the past with the uprooting of the present.

In a context mediated by virtuality, Kapoor's work is a wake-up call about the importance of the physical and corporal relationship between the work and the spectator, since for him it is this direct and face-to-face bond that propitiates A particular state of perception and a unique way of looking, feeling and thinking.

To exhibit Kapoor's work in the Memory Park promotes an aesthetic experience with a high symbolic content that causes spectators and visitors not only a state of introspection and personal reflection, but also a deep connection with the social and community that is housed in Every individual.

It is important to highlight the dimension of the first exhibition of one of the most relevant artists on the world contemporary art scene in a space of free public memory. This exhibition produced by the Park of Memory and the Government of the City of Buenos Aires, together with the Kapoor study in London, is accompanied by the British Council, the Embassy of the United Kingdom and the City Bank.

The Park of Memory highlights the generosity of Anish Kapoor and his study in London for the development of this site-specic and its commitment to a space of memory and human rights.

Anish Kapoor is considered one of the most important contemporary artists of the international scene. He may be best known for his sculptures in public spaces, which are both formal adventures and engineering feats, but in his many work series he manages very different scales and formats. Huge PVC skins, stretched or deflated; Concave or convex mirrors whose reflections attract and engulf the viewer; Hollows carved in stone and pigmented until disappearing: these voids and bumps evoke deep metaphysical polarities of presence and absence, concealment and revelation. In their works the forms seem to fold from the inside out, like a matrix, and the materials are not painted, but are impregnated with color, as if denying the idea of ​​an external surface and inviting the viewer to the confines of the imagination. Kapoor's geometric works of the early eighties, for example, rise from the ground and appear to be made of pure pigment, while the viscous, blood-red wax sculptures of the last ten years, kinetic and self-generating, With their own surfaces and explode the tranquility of the surroundings of the gallery. The mythologies of the ancient world - Indian, Egyptian, Greek and Roman - resonate with modern times, in which the events of the twentieth century cast their shadow.
He was born in Bombay, India, in 1954 and lives and works in London. He studied at the Hornsey College of Art (1973-1977) and completed his postgraduate studies at the Chelsea School of Art, London (1977-1978). His recent solo exhibitions include: Contemporary Art Museum of Rome (MACRO), Rome (2016); University Museum of Contemporary Art (MUAC), Mexico City (2016); Château de Versailles, France (2015); The Jewish Museum and Tolerance Center, Moscow (2015); Sakýp Sabancı Museum, Istanbul (2013); Martin-Gropius-Bau, Berlin (2013); Museum of Contemporary Art, Sydney (2012); Le Grand Palais, Paris (2011), Mehboob Studios, Bombay and the Royal Academy of Arts, London (2009). He represented the United Kingdom in the 44th. Biennial of Venice (1990), where he received the Duemila Award. He was awarded the Turner Prize in 1991 and is an honorary member of the London Institute and Leeds University (1997), the University of Wolverhampton (1999), the Royal Institute of British Architecture (2001). His main permanent works are commissioned by Cloud Gate (2004) for Millennium Park in Chicago and Orbit for the London 2012 Olympic Park in London. In 2013 Ark Nova was presented, the world's first concert hall in_able, at the Lucerne Festival based in Japan. He was elected Academician in 1999, awarded the Imperiale Premium in 2011 and Padma Bhushan in 2012; In 2003 he was decorated in the Order of the British Empire and in 2013 he was knighted at the Queen's Birthday Celebrations. In 2017 he was awarded the Genesis Prize.