Alison Jacques Gallery presents the gallery's second solo exhibition by Cuban-born artist, Ana Mendieta (b. 1948 Havana, Cuba; d. 1985 New York City, NY). This is the first solo show of Ana Mendieta's work in the UK since her retrospective Traces, curated by Stephanie Rosenthal at the Hayward Gallery in 2013. 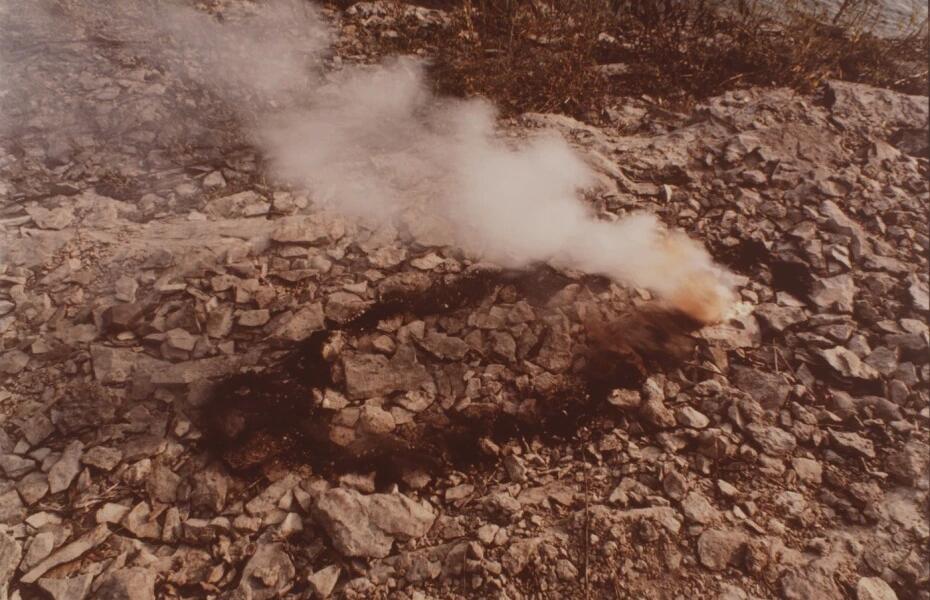 This exhibition focuses on the themes of metamorphosis and transformation in Mendieta's work, from her early performances at the University of Iowa in the 1970s, to her later sculptural work in the first half of the 1980s. This thematic focus includes groundbreaking work in performance and photography, drawings and leaf sculptures as well as three films that will be exhibited individually over the duration of the exhibition.

The theme of metamorphosis and transformation also includes camouflage, with a particular focus on the relationship of the body to nature. From 1974 until the early 1980s Mendieta worked outdoors, including a secluded location in rural Iowa, experimenting with natural materials such as moss, mud, grass and water. Later, she incorporated gunpowder into the work, which often resulted in smoking or burning, further emphasising the ephemeral nature of her work. Mendieta described her Siluetas - traces of her body that she outlined onto the ground or impressed into the earth - as 'earth-body sculptures'. Like her peers Alyce Aycock, Michael Heizer and Robert Morris, whose work focused on associations with the landscape and who often studied archaeological sites, Mendieta made several trips to the ruins of pre-Columbian civilisations in Mexico as well as a visit to the Escaleras de Jaruco caves in her native Cuba. The burial mounds at Yágul, Oaxaca, and the prehistoric caves in Cuba, provided the subject matter as well as the backdrop for Mendieta's practice, demonstrating the importance of ritual in her work.

Whilst the Siluetas often highlight the absence of Mendieta herself, her body features prominently in this show. Untitled (Facial Hair Transplants), 1972, documents Mendieta's gradual transfer of male facial hair to her own face, signalling an appropriation of power that she believed to be inherent in a person's hair. The pioneering nature of these performance photographs, which reference identity politics and gender transformation, precede the work of Cindy Sherman and clearly set a marker for other artists examining themes of self-transformation such as Gillian Wearing. In the film Ocean Bird (Washup), 1974, Mendieta floats, feathered, on the surface of the sea. Mendieta used plumage for several other works, referencing the symbol of the bird and the themes of transformation and metamorphosis.