Autopartes is Sofia Berakha's first solo exhibition at the Argentinean gallery Aldo de Sousa. Berakha's work is a dialogue with the tradition of painting and its more expansive possibilities. 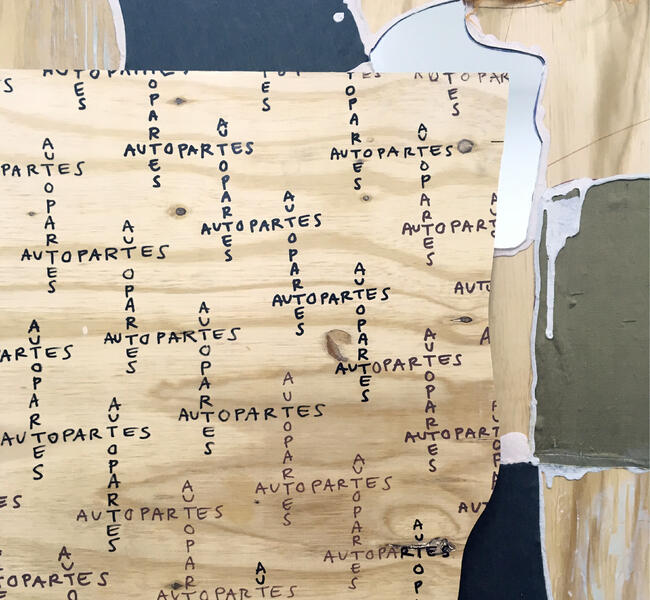 The exhibition is composed of a series of large-scale paintings executed on wooden boards of irregular format inspired by those surfaces on which the ten commandments appeared or the Rosetta stone, entities in which knowledge is inscribed.

In this series we can recognize elements such as car plotters, patches of fabric ranging from silk schantung, towel to leather, sgraffito areas that lift the material and build an image as the grid of the flags of racing cars.

All these objects are accompanied by a thick paint that takes the form of a stopped blasting. It is an alchemy mix made by our artist that contains sawdust, plastic membrane for roofs, glue, sand and other materials of construction.

Among the tabloids some are supported on cans, others are suspended on the wall, all were gestated with a sculptural intention. The pieces that form Autopartes enjoy the self-disguise, they pass by objects or exist under the veil of mirrors and frosted plastics.

In each of these paintings you can find many paintings. Pieces that are formed by pieces such as "Chicklet" chairs designed by Herman Miller in 1976 formed by 4 identical elements that are combined. For Sofia Berakha, painting is a pact, a painter will always think like a painter, even if he writes a poem, chooses his clothes, travels a path…