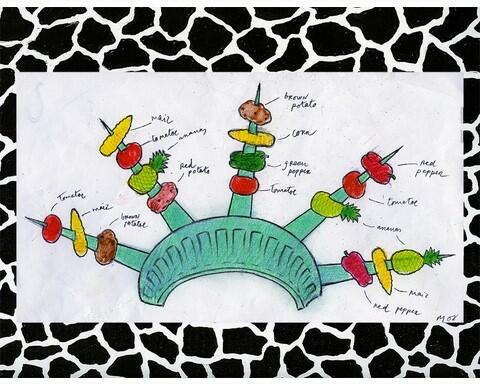 “The concept of liberty brochette came first in 1984 when I was working on the idea of how to top the building of El Internacional and since the Lady was haunting behind the monumental scaffolding build for her restoration (Centennial/Celebration), I first though the tourists coming to NYC, will at least see her aggressive crown in our restaurant as a kind giant BBQ sign. So, I build a model of the lighting brochette and we exhibited a long time in the window of El Internacional Tapas Bar & Restaurant. Later, when I got more involved with the Honeymoon Project, the love affair between the Columbus Monument (Barcelona harbor) and Miss Liberty (New York harbor), as symbols of "conquista" and "liberté", I thought the Brochette, should warm up the connections with colonial food journeys... diaspora...”, explained Antoni Miralda.

ANTONI MIRALDA (Barcelona, 1942) is a multidisciplinary artist who has investigated the art of food for more than four decades, using a vibrant and inclusive language, both humorous and based on the celebration of the senses. His projects, exhibitions and street events have engaged international art audiences far and wide. From 1984 to 1986, Miralda together with chef Montse Guillen ran the acclaimed El Internacional Tapas Bar & Restaurant in New York, presenting the Video Menu and serving a mix of Mediterranean food and American history. Between 1986 and 1992 Miralda developed The Honeymoon Project, a multi-site, international project about the imaginary wedding of New York's Statue of Liberty with the Columbus Monument in Barcelona. The project was conceived as a series of ceremonial and participatory events working with the symbolic meanings of the two opposite icons for freedom and conquest. In 2000 Miralda and Montse Guillen started the ongoing FoodCultura project in Miami and Barcelona, including an archive, collections, exhibitions and global projects.