The Academy of Fine Arts of Macereta awarded the Chilean artist Alfredo Jaar with the 2019 Josef Svoboda Prize of Artistic and Creative Talent. In addition, the institution recognized him as Doctor Honoris Causa of the academy.

On the occasion of the celebration, Jaar was invited to dictate a Lectio Magistralis in the Aula Magna of the academy. The conference will feature an introduction by Ida Panicelli and will take place on February 14th, day on which the artist will be awarded. Recognized as one of the most prestigious awards in the field of arts in Italy, the Josef Svoboda Prze of Artistic And Creative Talent has awarded names such as Michelangelo Antonioni, Gillo Dorfles, Jannis Kounellis, Achille Bonito Oliva, Maurizio Mochetti and Giancarlo Politi. 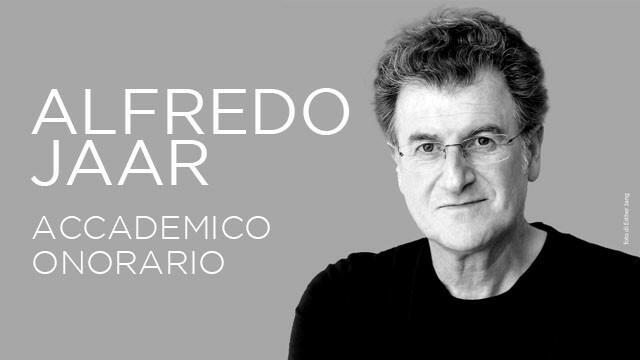 The Josef Svoboda Prize was born in 2005 to commemorate the eclectic figure of Josef Svoboda (Časlav 1920-Prague 2002) known as one of the world's leading scenic designers and the greatest representative of the post-WWII scenographic renewal. The Prize is awarded every year to a prominent intellectual in the world of art and creativity, a figure who, through the happy coalescence of ethics and aesthetics, has the ability to reflect upon our present condition.

Since its first editions the Award has focused its index on national and international exceptional thinkers in the field of arts, criticism and theory. Now in its 15th year, the Award is associated with a Doctor Honoris Causa.