A PUPPETS GLOBAL TRAGEDY AT THE JUMEX MUSEUM 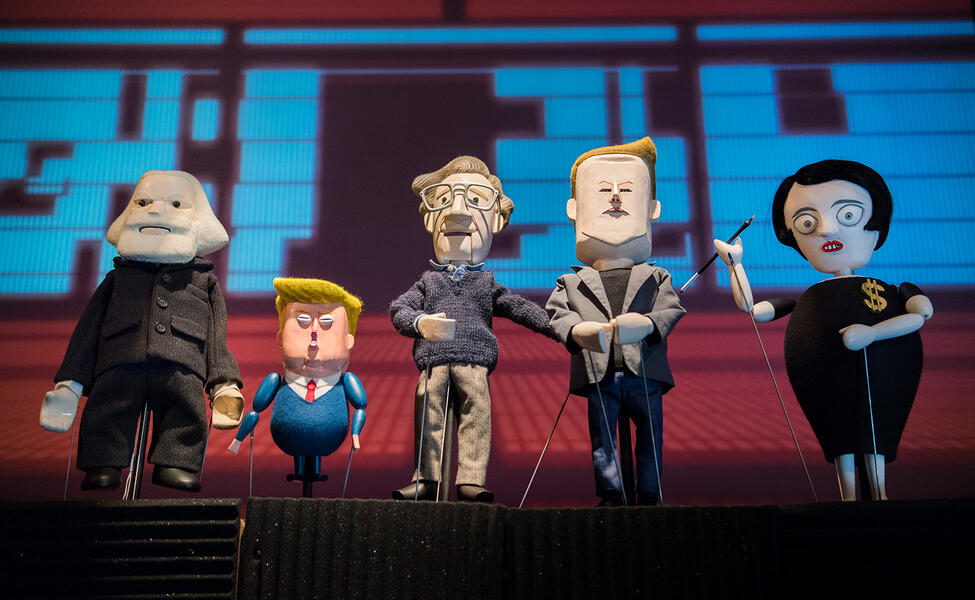 Reyes objective in this work full of irony is, on the one hand, to emphasize the excessive technology development and, on the other hand, the financing of this euphoric advance, the consequences of it and the formation of technocratic governments. Thus, the play reveals the ethical dilemmas linked to technology growth questioning current political ideologies.

The project to carry out this work was born from a meeting between Pedro Reyes and Noam Chomsky, one of the most outstanding thinkers and linguists of the 20th and 21st centuries. The artist had been invited by the Massachusetts Institute of Technology (MIT) to carry out a project as a guest of the art department.

In this way, the Puppet theater of Reyes is built from oppositions. Chomsky is faced with Ayn Rand character - a thinker whose influence proliferates in Trump's Republicans-. It also appears Elon Musk puppet, introduced as the technocratic hero of this  global tragedy proposed by Reyes, where the deus ex machina of the Greek tragedy is replaced by the so-called iWay call.

Pedro Reyes has integrated puppet theater into his wide artistic production since 2008, using hand-made puppets in Japan inspired by the bunraku tradition that is characterized, among other things, by using figures with a wide range of facial gestures. His works for puppets include The Permanent Revolution (2014), about Leon Trotsky’s life, presented at the Jumex Museum, as well as other political satires with key figures in the history of political economy such as Karl Marx and Adam Smith.

Los robots no lloran was originally presented as Manufacturing Mischief, where Reyes collaborated with Meghan Finn as director and Paul Hufker as a screenwriter. The trio previously worked on Doomocracy: A political house of horrors, produced by Creative Time as a result of the 2016 presidential elections in the United States. Manufacturing Mischief premiered at MIT in April 2018 and since then has been presented at Carnegie Mellon University, Pittsburgh; Canadian Stage, presented by the Power Plant, Toronto; The Tank, New York; and Serpentine Pavilion, London.