The indelible influence of Latin American and Caribbean modernist architecture on contemporary artists will be explored by The Bronx Museum of the Arts in the exhibition “Beyond the Supersquare”, on view May 1, 2014 through January 11, 2015. 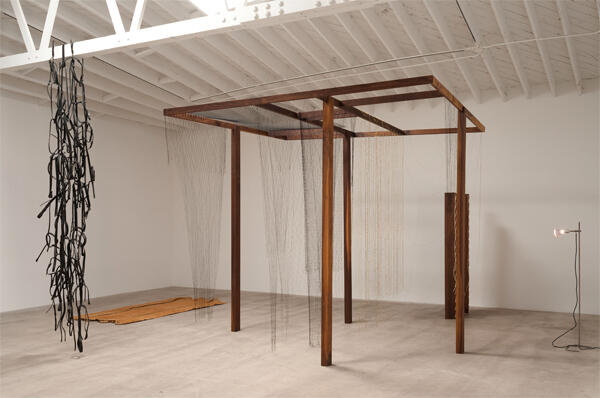 The exhibition features over 30 artists and more than 60 artworks—including photography, video, sculpture, installation, and drawing— that respond to major Modernist architectural projects constructed in Latin America and the Caribbean from the 1920s through the 1960s.

“Beyond the Supersquare” examines the complicated legacies of Modernist architecture and thought—as embodied by the political, economic, environmental, and social challenges faced by countries throughout Latin America— through the unique perspective of artists working today. The exhibition represents the culmination of a four-year research initiative at the Bronx Museum spearheaded by Executive Director Holly Block and Independent Curator María Inés Rodríguez. Many of the exhibition themes have grown out of a three-day conference held at the Bronx Museum in October 2011, during which artists, architects, urban planners, and scholars convened to discuss the enduring impact of Modernist architecture and ideas in Latin America and the Caribbean.

“Beyond the Supersquare” explores how contemporary artists from Latin America, the Caribbean, and other regions have responded to the aggressive rise of Latin America’s urban centers and the ways in which those urban areas have evolved since the mid-20th century. Also examined is the social critique of political, social, economic, and environmental issues in Latin America and the Caribbean, including unstable economies, ad hoc urbanism, militarized police forces, and rapidly exhausting natural resources. Exhibition designer Benedeta Monteverde, of Mexico City, has worked closely with the two curators to generate the exhibit plan for the galleries at the Bronx Museum.

Artists in the exhibition will include:

“Beyond the Supersquare” will be accompanied by a volume, co-published by The Bronx Museum of the Arts and Fordham University Press, featuring original scholarship by noted Latin American architects, historians, and curators. Beyond the Supersquare: Art & Architecture after Modernism in Latin America will include material presented at the Museum’s 2011 Beyond the Supersquare conference led by Ms. Block and Ms. Rodríguez. The advisors for the conference were Carlos Brillembourg (Carlos Brillembourg Architects), Felipe Correa (Somatic Collaborative and Harvard Graduate School of Design), Ana Maria Duran (Estudio A0), Belmont Freeman (Belmont Freeman Architects), Jose Lira (University of Sao Paulo), Ligia Nobre (Independent Curator), and Pedro Reyes (Artist).

The volume will also include an image-rich folio highlighting artworks from the exhibition. Drawing from architectural projects of the 1940s to the 1960s, as well as from socially engaged artistic practices of the present day, the anthology will examine the consequences of the heroic and utopian ideals popular in architectural discourse during the Modernist era, which are evident in the vastly uneven economic conditions and socially disparate societies found throughout the region today.

The Modern Movement proposed an ethical solution to the perils of industrialized societies around the world, offering the premise of a rational evolution from preceding eras of human development. From the late 1920s onward, Latin America quickly became fertile ground for applying the ideals embodied by Modernism. Gradually, Modernist theories and models were adopted in the region until nearly every Latin American country began to generate its own distinctive Modernism shaped by the climate, resources, and other characteristics specific to each nation. Despite the idiosyncrasies of each country’s political landscape, for the governments of Venezuela, Brazil, and Mexico—where the movement developed on a large-scale—the Modern Movement would become a strategic tool to disseminate an image of societal progress and “modernity.” Other countries followed suit, yet all held the intent to utilize Modern architecture and urbanism as a symbol of cultural refinement, technological progress, and economic prosperity that would permit these less industrialized countries to join the ranks of the world’s most advanced societies, or at least convey their aspirations to do so.

“Beyond the Supersquare” is made possible with major funding from The Andy Warhol Foundation for the Visual Arts, with additional support from Acción Cultural Española, Calouste Gulbenkian Foundation, The Consulate General of Colombia in New York, The Embassy of Colombia, The Evelyn Toll Family Foundation, Furthermore: a Program of the J. M. Kaplan Fund, Graham Foundation for Advanced Studies in the Fine Arts, The National Endowment for the Arts, The O’Grady Foundation, Sciame Construction, and The Venezuelan American Endowment for the Arts. Special thanks to The Architect’s Newspaper and The Mexican Consulate.