I AM NO LONGER MODERN, WE ARE CONTEMPORARY. A statement of intentions

As of September 6, the latest Bienal de São Paulo, one of the doyennes of the world biennial circuit, will be open to the general public. 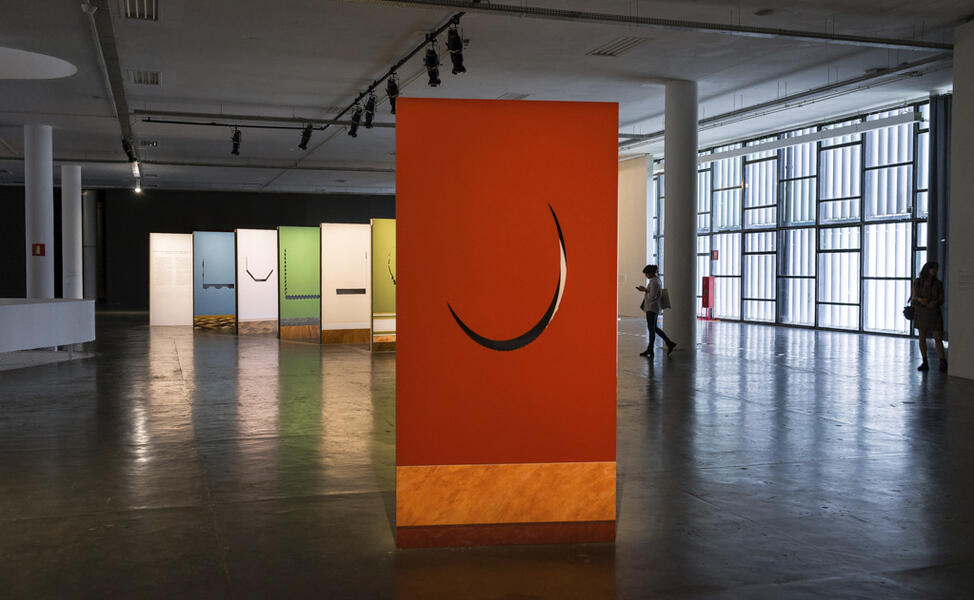 And emphasis should be laid on the expression “general public” because, even though since 2004 admission has been free of charge and the educational program of the Bienal has broadened its scope year after year, on this occasion several gestures indicate an opening to a new conception of the collective, in line with the movements that are arising worldwide, claiming a revision and an adjustment of the sense of democracy. An idea of dialogue, openness and transparency which already became manifest in the composition of the curatorial team, not made up of a chief curator and a support group, but a non-hierarchical assemblage of professionals, composed of Charles Esche, Galit Eilat, Nuria Enguita Mayo, Pablo Lafuente and Oren Sagiv. For the first time, the Bienal has a team which is not linked to Brazil or to America, whose members, upon their arrival, decided to open a dialogue through the local associate curators Benjamin Seroussi and Luiza Proença, and through multiple events and meetings, characterized by the attitude of listening and of searching to understand the Brazilian context, with artists, collectives and other agents of the cultural scene.

This statement of intentions is now perceived as soon as the visitor enters the venue: for the first time security controls are not situated as soon as one crosses the doors at the level of Parque de Ibirapuera, but instead, that level is open to the free circulation of visitors, and the collective and debate projects are organized on it, those events in which the concept of reflection through training/education take precedence: the Mujuwara tree-school, which brings together the experiences of Sandi Hilal and Alessandro Petti in the Palestinian refugee camps, with the activities of the Brazilian group Contrafilé; the drawings that cover Dan Perjovschi´s crystals analyzing the local socio-economic situation, Bik van de Pol’s program of lectures, together with the School of Missing Studies announced in a great colored poster, or the library intervened by Erick Beltrán with new associations of references of bibliographical categories and infiltrations of poems and drawings in the books themselves.

The bet in “How to (…) things that don’t exist”, as explained by Esche, is to re-think (search, recognize, fight, read, use, imagine) social, economic or political models, taking the contemporary as skyline and proposing an art committed to its reality and that positions itself as a possible tool of change towards that future of unknown forms, but which could overcome modern conflicts in the representation of subjectivities.

As characteristics of this thinking, we could highlight the non-authorial intent of each of the 81 projects (and not works) than make up the proposal, the insertion of modes normally not contemplated within an art exhibition, like theater, groups of urban action or activist collectives, and the positioning in the margins: getting away from the more established scenario to create dialogues among its components, whether in the treated themes, which under the prefix “trans-” cover forgotten or traditionally rejected subjectivities; in the selection of the artists from 34 different countries predominantly from the Geopolitical South, or in the focus of activities carried out and those to come, which happen in neighborhoods of the city’s periphery or involve groups normally excluded from this debate.

It would be impossible to attempt to map this condition of contemporaneity, this talking about the uncertain, unless this is done upon the ruins of former models, or at least this is what we glimpse in the selection of works shown at the Bienal. Articulated around figures who are pioneers in the questioning of absolute models and established codes, new critiques and calls to the creation of new logics leak through, which although they may have resonances in theories of the absurd, point to a more constructive spirit. While not wishing to categorize the exhibition, we might say that some thematic nuclei may be discerned, all of them with transgressions and pollutions.

Concerning the projects of the park area, there is a proposal for new educational models or rupture of the transmission codes of classical knowledge. From the experimentation of Republican Spain “La nueva escuela” in an installation by Archivo F.X. and Pedro G. Romero; the audiovisual “The Revolution must be a school of unfettered thought” by Jakob Jakobsen and María Berríos, on the experience of the Cuban exhibition “Del tercer mundo” in 1968 and its attempt to create new museographic languages; the taxonomic process of new beings and objects more related to the emotional than to the scientific in “The name giver”, by Michael Kessus Gedalyovich; to the impossibility of the archive and inherited timelines of methods illustrated in the mental maps and drawings of “A research”, by Lea Perjovschi.

The insertion of the civilized man in social systems with a static conception appears in the two parts of “The incidental insurgents” by Basel Abbas and Ruanne Abou-Rahme, a recreation through video and the documentation of anarchist biographies and characters from novels by Bolaño in the search of construction of an identity in crisis; the dialectic and ironic revision of the control procedures in Cuba led by the hand of Lázaro Saavedra; the scenographic setting of the Colombian group Mapa Teatro – Laboratorio de Artistas, entitled “Los incontados”; or in the reflection based on the methods for producing textiles in America and Europe rendered in a metaphorical way in the carnivalesque images of project “Loomshuttles, Warpaths” by Ines Doujak and John Barker.

Articulating the central zone of the so-called area of the Columns (the most classical in its disposition of consecutive rooms) is the project by Juan Downey “Video Trans Américas”, a work which in the 60s proposed to travel across the continent from north to south to assemble, through the cinematographic technique identified as revolutionary, cultural diversity, and thus act as a bridge for the knowledge and reconception of the temporal and spatial parameters. Connected to this and in relation to the post-colonial discourse of valuation of the indigenous, as a massacred culture and recovery of forgotten knowledge, three Brazilian proposals: Clara Ianni’s video together with the founder of the “Mães de Maio”, Débora Maria da Silva, on people who went missing both during the military dictatorship and recently as a result of actions of commandos, the song of Guaraní Indian Almires Martins filmed by Armando Queiroz and photographed by Marcelo Rodrigues; or the construction of a Casa de Caboclo, between the living and the ritual place, by Arthur Scovino.

To talk about violence and new uses, from terrifyingly repressive violence to battlefield for community’s rights, the starting point of the installation of Juan Carlos Romero’s archive “Violencia”; then there are recent works, among which the video “Wonderland” by Turkish artist Halil Altindere, a fiction in the form of a rap video clip which picks up the anger about the speculative movements and about gentrification in Istanbul, and the small installation of video and documents by Gabriel Mascaró, “Não é sobre sapatos”, a confrontation of the movements of the protestors and the infiltration techniques of the police in the latest demonstrations in Brazil, through the selection of images of the participants’ shoes, are worth mentioning.

Sexuality as a field of conflict is taken up in the display of photocopies of the naked body in “Zona de tensão” by Hudinilson Jr., and the assemblage of hidden works of the 1970s and 1980s in “Dios es marica” (Zenil, Ocaña, Zevallos and Yeguas del Apocalipsis), to the construction of the “Museo Travesti del Perú 2009-2013” by Giuseppe Campuzano. Images that question the social construction through gender and its transgression of the repressive models.

The starting point, between the search of the transcendent and the political uses of religion, could be situated in Val del Omar’s movies, made in the Spain of the 1950s as an attempt to liberate mystical encounter through the experimentation of the filmed image, which connect with Joan Baer´s esoteric paintings and Teresa Lanceta´s tapestries, together with the questioning of structures and beliefs organized in the video “Infierno” on the new temple of Salomon in São Paulo by Yael Bartana, the new communist gospel of “Letra morta” by Juan Pérez Agirregoikoa, or the film by Kasper Akhøj and Tamar Guimarães “A familía do Capitão Gervásio”, which compares with dreamlike aesthetics the urban utopias of the spiritist religion and the modern Brazilian project .

This assemblage of proposals of transformations, with open and participatory formats, many of which do not originate in or deal with the discussion on formal and autonomous art, is characterized by realistic representation and in general, by identifiable signs, with three important exceptions: the photographs and sculptures by Kransinski, reflections on the spatial relationships in the context of Poland of the 1970s, and two current reflections, that of Waalid Rad’s panels and the conflicts between institutional globalization and traditional Arab representation, and the deconstruction and recontextualization in the exhibition space itself of Jorge Oteiza’a abstract sculpture by Asier Mendizabal.

The 31st Biennial will be held through December 7, with an active program of side events. The challenge, that true connection with society beyond the artistic and that rupture, perhaps impossible, with our modern past, to look into not definitive possibilities of society/societies, is already set out. We are reminded of this by the infiltration of Marta Neves’ “Non-ideas” banners, a vindication of the need to use our imagination.