New works by Paradela will be featured in their upcoming fair presentations and several large-scale paintings will be exhibited in a group-show at the gallery in November, titled New Beginnings. 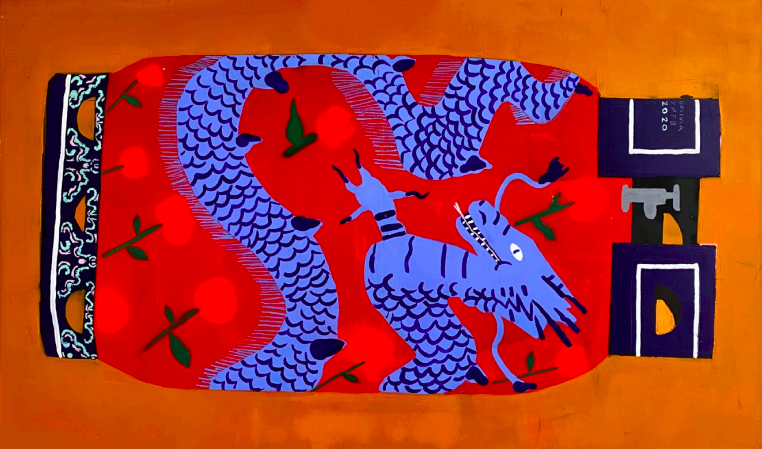 Born in the city of La Plata, Argentina in 1989, Matías Paradela holds a Bachelor of Fine Arts from the Fine Arts Academy in Buenos Aires which he received in 2008. He has participated in several group shows and has had solo shows in his natal Argentina as well as in his second home Bolivia where he also has a studio.

"The gas tanks come on big trucks with music, bells, and noisy klaxons like an ice-cream truck. People inside their houses yell: “El gas!” Everyone immediately stops whatever they are doing; someone goes out to stop the truck, another takes some cash, and a third person takes the empty gas tank out of the house. This coordinated choreography is part of everyday life in my neighborhood in Bolivia.

Gas tanks are nasty but fragile creatures that can explode at any time. They portray Bolivian identities: messy, dangerous, but caring and vital. They are in every house. They are essential to life. They cook our meals and keep us warm in the cold of the mountains.

I paint gas tanks as they are expensive relics, vessels to catch attention. Like a shiny wrapping paper to switch the way we see them. They lost the uniformity and yellow neutrality, and each develops its own personality.

I made gas tanks become part of my identity to feel less foreign, to be part of something bigger; a family, a country, a neighborhood. To feel at home without having one.”

From its inception, Salar has been characterized by its strong curatorial direction and vision. The history of the gallery dates back to 1994 when it started as Salar Center for Communication and the Arts. Its main objective was to promote the local art scene in its various forms and to support emerging talents. In 2008, it changes its name to Salar Galería de Arte, which became a platform for dialogue and education of contemporary Latin American art abroad. Since then, it has evolved into a gallery that operates on a global scale and represents a select group of international artists and artist’s estates participating in various art fairs and exhibitions in America, Asia and Europe.