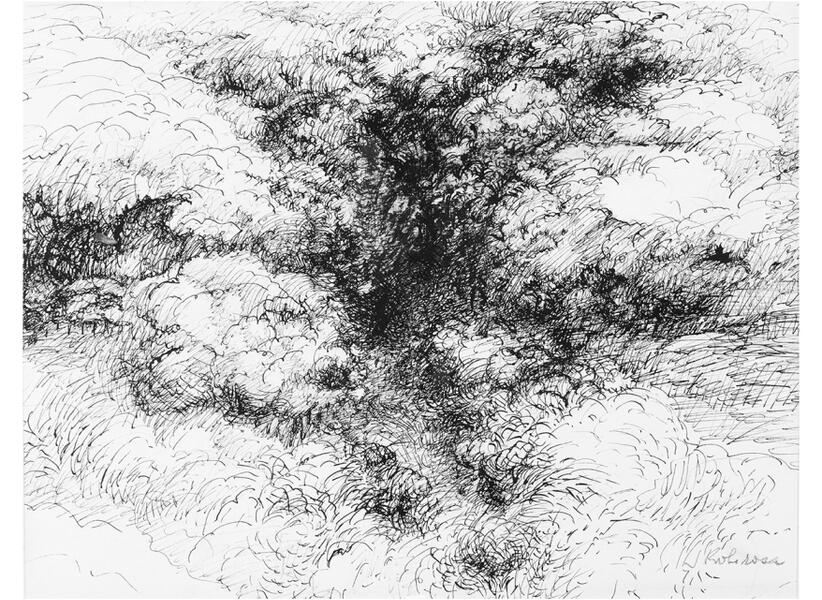 The Josefina Robirosa exhibition at OdA is the first in her long career that brings together works on paper almost exclusively, and which are mostly pencil or ink drawings, and in some brief painting interventions are added. With contemporary criteria, it could be affirmed that his work began through drawing and abstraction. This show is made up of five series that indicate diverse approaches by the artist to the universe of the line at different moments in her career.

OdA arte gallery was born in 2015 in Buenos Aires founded by Laura de San Martín, architect and photographer. OdA focuses on the talent of established and mid-career artists, taking care of the individual language of each one, as well as it encourages the production and exhibition of artists in training, giving them a follow-up in their creative process. In the search for its artists, OdA highlights diversity of expression, uniqueness and beauty, both from a conceptual and narrative perspective, seeking to excite, suggest and evoke the viewer.

Next, the curatorial text prepared by Mercedes Casanegra

"Seen as an open-ended activity, drawing

it is characterized by the line, which is always unfolding always becoming. ”

The first works exhibited here correspond to the year 1956, at which time Robirosa was in her twenties and taking her first steps in the artistic environment of Buenos Aires. At that time, the explosion of geometric abstract art of the mid-1940s resonated, and various modes of lyrical abstraction spread.

At that time belongs a set of works on paper of small to medium size. The artist used very fine and subtle ink lines, with some brief white, gray or blue tempera or watercolor interventions. He also resorted to minute pointillist-style touches. These compositions describe the path of centripetal and undulating forces whose dynamism is leading. Some take on the appearance of sidereal spirals and clashing and sparkling energies.

Drawing No. 1, 1956, is part of the series Structural landscapes, tempera on paper, both for its composition and for its painting sweeping technique, it responds to a type of abstraction that developed in the 1950s. A similar composition although on a different scale was the one that inspired the creation of a 180x260 cm mural, located in the Alvear Hospital in this city.

Two of the only three paintings in the exhibition, both from 1956, are small in size and have been reproduced in published books about the artist. They are abstract landscapes. The design of the circular shapes, suns or planets, was generated through a change in the color of the line, from the blue of the sky to the yellow-orange of the sun. It is a linear painting.

Another group is made up of four works with black lines on a light sepia background. What is particular about them is that the artist not only projected the strokes and touches on paper as specific microforms, but also configured some of the compositions in circular shapes. And, they all have an implicit dynamism which also makes them kinetic compositions.

The set Untitled (ca. 1959-1960) of mixed technique on paper, of 19 pieces of18x12cm each, are improvisations in ink and gouache with hints of orange, ocher, black and gray. Both the strokes and the restriction and choice of a narrow range of colors give this set a climate that could be related to Chinese or Japanese characters. Given the small size of each piece, the partial or total exhibition of the set reinforces the idea of​​the series as if a 'reading' of each and of the set was possible.

Nature returned to its center is a series of drawings made between 1973 and 1979 that the artist made after a period of optical geometric practice in which the simultaneous bands of color were protagonists. Today the artist's workshop has only five pieces in this series.

These are compositions of surreal inspiration. The artist turned to landscapes or elements of nature and human figures treated with traces of abstraction, geometrization of planes and simultaneously present figurative components, which in an original way, allude to landscapes of a surreal nature. In some of them there is a conjunction between human figures and elements of nature, as if there was a symbiotic relationship and mutual transformation. The natural environment is shown in them as vegetation of vine leaves, wavy snowy planes with a recumbent human figure; a plane of clouds seen from above and in which rocks emerging from there are observed; a rectangular cut in the ground from which wooded vegetation emerges; an irregular plane of cut out maritime surface from which emerges a large cluster of dark storm clouds, among others. Fragmentation, a formal and poetic resource in these works, has a positive condition, not of fractionation or severing, but of fullness because of that intimate and imaginary encounter of two origins, natural and human.

In 1977 Barbara Duncan, American art historian, organized the group exhibition Recent Latin American Drawings (1969 - 1976) at the Center for Interamerican Relations, today Americas Society, New York. On that occasion, she chose as the only illustration for the cover of the catalog, which brought together numerous Latin American artists, Robirosa's drawing Identification (1975), which the curator had bought for her own collection a year before.

Robirosa gave an extensive development to this series, which took place after a personal crisis with her geometric abstract work and with the use of color that she practiced until 1969.

In the 1980s the artist began a series that would characterize her artistic profile in a special way and which she used to call "the forest series". The work Picada, 1980, oil on canvas, 135 x 120 cm, among them, collection Museo Nacional de Bellas Artes, Buenos Aires, was the cover of the first book that was made about the artist with my authorship and edited by Ediciones de arte Gaglianone in 1997.

That series had its version of drawings in ink. In this exhibition, the closest production to the present are seven works from that group that is closely related to the theme of forests. The construction of those works in painting was done based on brush strokes and almost circular touches. In drawing these were replaced by short lines of ink superimposed through the inspiration of wild bushes of fine branches or grass, with some relation to the appearance of bales, although aerial. However, the artist's intention was not realistic. The images show poetic rather abstract and aerial forms of these clusters, of these plant clumps, in a space that is less natural than abstract, yet they suggest subtle allusions to their affiliation with the earth.

This exhibition by Josefina Robirosa shows the interest of drawing as an expressive mode from her early periods of her work until the 1980s. However, the artist never appealed to the traditional academic concept of the discipline. She approached another idea of ​​drawing, that of the free, independent line, which is the transfer of this fundamental element of art of all times and all latitudes, to a free, multifaceted dimension that generates infinite worlds, as evidenced by this set of drawings by Josefina Robirosa made over twenty-four years.

The exhibition can be visited by making a schedule with OdA’s director Laura de San Martín (laurasanmartin@odaarte.com)